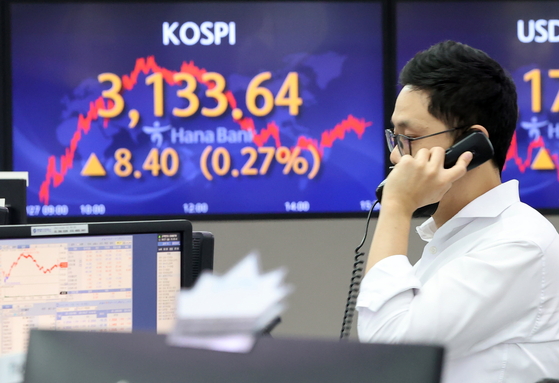 A screen in the Hana Bank's trading room in central Seoul shows the Kospi closing at 3,133.64 points on Monday, up 8.4 points, or 0.27 percent, from the previous trading day. [YONHAP]

After a lackluster start, the Kospi rebounded on the lower-than-expected Covid-19 cases Monday.

Foreigners purchased stocks as Korea's daily Covid-19 cases receded to slightly under 2,400 Monday from a record high of 3,273 on Saturday.

Investors were monitoring the risks from the massive $310 billion debt of giant Chinese property developer Evergrande that caused high volatility in the Asian markets last week.

"In contrast to the losses in China, the Kospi showed a relatively steady performance — investors seem to have realized that the ripples from the [Evergrande] risk may not be as destructive," Daeshin Securities analyst Lee Kyung-min said.

The U.S. Federal Reserve's chief is set to testify at a Senate hearing Tuesday.

The local currency closed at 1,176.8 won against the dollar, up 0.3 won from the previous session's close.