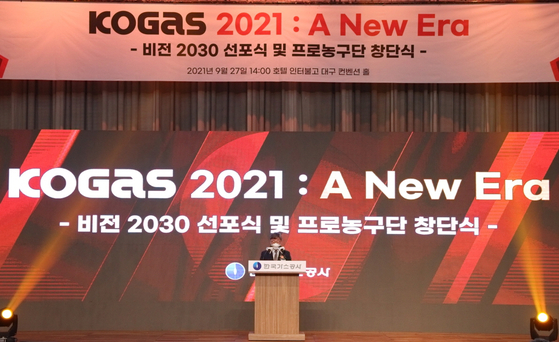 Chae Hee-bong, president and CEO of Korea Gas Corporation, speaks at the "Kogas 2021: A New Era" event on Monday in Daegu. [KOGAS]

Korea Gas Corporation, or Kogas, announced its hydrogen business plan and a new corporate vision at a special event named “Kogas 2021: A New Era” on Monday.

Held in Daegu, the event was attended by some fifty people including Chae Hee-bong, the CEO and president of Kogas, and Chae Hong-ho, the Deputy Mayor for Administrative Affairs at Daegu.

Kogas presented its new business initiatives with the goal of becoming a frontrunner as an eco-friendly energy company and to engage in more business-to-consumer (B2C) businesses.

At the opening of the event, Chae declared that Kogas will strive to make life greener for people everywhere with its new 2030 vision dubbed “Everywhere Green Life, H2 Kogas.”

The inauguration ceremony of the professional basketball team kicked off with a congratulatory message from Prime Minister Kim Boo-kyum, followed by celebratory videos and speeches from basketball player Seo Jang-hoon, Deputy Mayor Chae, KBL president Kim Hee-ok and many others.

Kogas unveiled the brand identity of the basketball team, the Pegasus, with matching uniform design, emblem and mascot. On the uniform will be the brand logos of Hana Bank and the U.S.-based Exxon Mobil, the official sponsors for the team.

“Starting with the establishment of the Pegasus basketball team, Kogas will become a B2C company and actively contribute to the local community,” said CEO Chae. “As the future leader of the hydrogen economy and an eco-friendly energy company, we wish to get attention and support.”