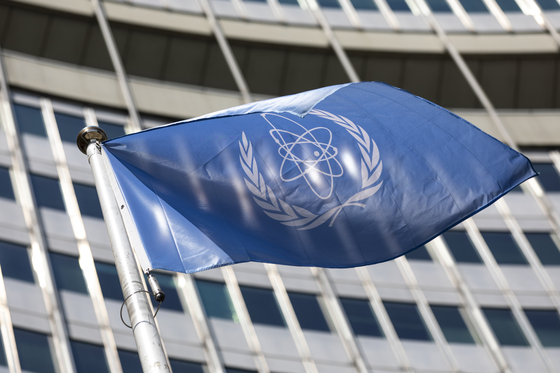 In this June 7 file photo, the flag of the International Atomic Energy Agency (IAEA) waves at the entrance of the Vienna International Center in Vienna. [AP/LISA LEUTNER/YONHAP]

Korea will chair the International Atomic Energy Agency (IAEA) board of governors for the first time since it helped found the organization in 1957, the Foreign Ministry announced Monday.

“We consider it an international recognition of the contribution that Korea has made so far on preventing the proliferation of nuclear weapons and for the peaceful use of nuclear power,” a Foreign Ministry official told the press on Monday.


The board of governors consists of representatives from 35 nations including Australia, Britain, Canada, China, France, Germany, India, Japan, Russia, Saudi Arabia, South Africa and the United States, and is one of the two decision-making bodies of the IAEA.

The board meets five times a year to make recommendations on the IAEA’s programs and budget, reviews applications for membership and approves safeguard agreements, through which the IAEA verifies that a country is keeping its commitments on nuclear nonproliferation. Additionally, the board makes decisions on establishment of nuclear safety standards and promotes international cooperation on research and application of nuclear technology on agricultural production and industrial resource management.

While Korea has a number of its key security interests being dealt at the IAEA, including the decommissioning of the Fukushima Daiichi Nuclear Power Station in Japan and IAEA monitoring of North Korean nuclear weapons program, Korea’s assuming the chair will not necessarily mean the country will have more say in the IAEA’s decisions on those issues, the Foreign Ministry said.

“The chair of the board must maintain objectivity in dealing with these issues at the IAEA, and so when the board discusses Fukushima and other issues, the chair will maintain this objectivity,” said the ministry official.

“If there is any change at all that comes with Korea’s role as chair of the board, it will be that we will be able to understand what the IAEA board members have on their agenda in regards to the North’s nuclear weapons programs a little earlier than others, as they will report their findings to the chair,” said the official. “It will then be the job of the chair to ensure these agendas are communicated effectively amongst the members.”

North Korea was a member from 1974 to 1994. IAEA inspectors were forced to leave North Korea in 2009. The IAEA has since then been using public information and satellite images to monitor its nuclear weapons programs. Last month, the IAEA reported sightings of suspicious activities at North Korea’s Yongbyon nuclear complex.

The IAEA board nations are divided into eight regions, and a country per region takes turn to assume the chair position annually. Korea is part of the Far East nations, which also includes Japan.

For the last seven times that it became the turn of a Far East nation to assume the role, Japan did so six times, and Vietnam once.

Korea’s Foreign Ministry said it had the “full support” from Japan in winning the chair position this time.

Shin Chae-Hyun, Korean ambassador to Austria and Korea’s permanent mission to the international organizations in Vienna, elected the chair of the IAEA board of governors on Monday. [MINISTRY OF FOREIGN AFFAIRS]

According to the ministry, Korea is the 11th biggest donor among IAEA members in terms of its funding of the organization’s programs. In the past 20 years, Korea contributed over $10 million to its nuclear security and nonproliferation initiatives.

Shin Chae-Hyun, Korean ambassador to Austria and Korea’s permanent mission to the international organizations in Vienna, will assume the one-year role through September 2022. His predecessor was Ambassador Heidi Alberta Hulan, Canada’s permanent representative to the international organizations in Vienna and ambassador to Austria and Slovakia.

iaea korea chair board of governors