Kim Do-hyeop, 41, thought that working at a big, well-known company would guarantee a financially stable life.

“It turns out I was wrong,” said Kim. “We have to take care of ourselves.”

Kim worked at STX Offshore and Shipbuilding, the world’s fourth largest shipbuilder, after graduating from Pusan National University in 2008.

But soon afterwards, the global financial meltdown hit, and the shipbuilding industry took a body blow.

To escape the looming threat of being laid off, Kim started to look for a different job.

As soon as he settled in there, he realized he had ended up in a dud division.

Once again, he was in danger of losing his job.

“It was then that I began to plan my early retirement,” said Kim. “Life can be pretty precarious and employees can be discarded at any time. I could no longer trust my job to offer me a financially stable life.”

So, Kim whittled down his expenses and started investing in stocks.

Kim is a vocal adherent of the FIRE Movement, a life philosophy that encourages saving and investing significant amounts of one’s salary with the goal of gaining financial independence and opting out of the workforce before the age of 40. FIRE stands for “financial independence, retire early."

The movement began after the 2008 global financial meltdown among young individuals in the United States who grew up in high-income families and received high levels of education. 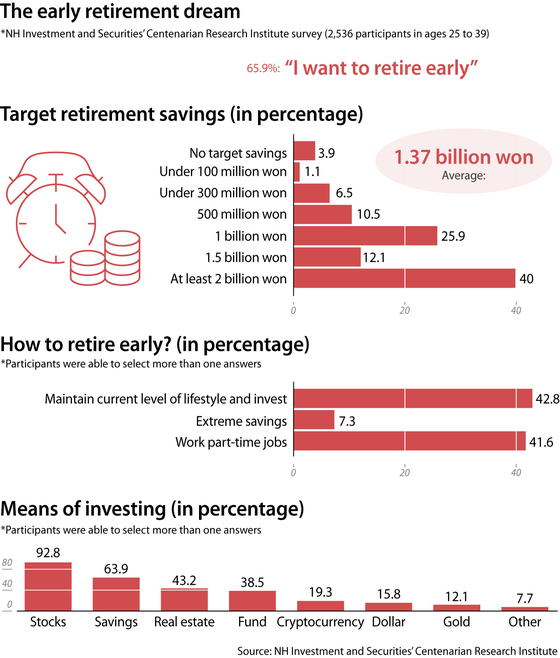 Now, in Korea, the FIRE Movement is catching on among people in their 20s and 30s.

In March 2021, NH Investment and Securities surveyed 2,536 people between the ages of 25 and 39 on early retirement and found that 65.9 percent desired early retirement with a target savings of 1.37 billion won.

The movement is gaining momentum as many young workers in Korea suffer from unemployment, high costs of living and unstable job positions, all of which have been aggravated by the Covid-19 pandemic.

Many who have embraced the FIRE Movement have veered away from traditional jobs as a means to accumulate wealth and have turned to investments.

The survey showed that the majority of the respondents, 42.8 percent, said that they wished to maintain their current lifestyle and prepare for early retirement through investments, while the least proportion, 7.3 percent, answered that they planned to accumulate wealth by cutting down their expenses.

The same NH Investment and Securities survey showed that the most popular investment was stocks (at 92.8 percent), followed by savings (63.9 percent), real estate (43.2 percent), fund investment (38.5 percent) and cryptocurrency (19.3 percent). (The applicants were allowed to pick more than one answer.)

One reason for the strong inclination for equities is the stock market’s lengthy bull run despite Covid-19.

On the other hand, incomes have been near stagnant, according to a study by the Korea Economic Research Institute, which examined the average monthly incomes at companies that have over 300 employees over the past ten years.

Consequently, it has become widely believe among young people that it is unrealistic to depend on salaries to accumulate wealth.

According to KB Kookmin Bank, Korea’s Price-to-Income Ratio in June 2020, which was calculated by dividing the median apartment price with the median annual household income, recorded an all-time high with 18.5.

The ratio means that an average family needs to save their entire salaries for 18 years and six months in order to afford to buy a residence.

Lee Go-eun, a former stock market analyst who chose early retirement at the age of 39, said she had felt exasperated as she witnessed people around her make much more money than her through investments while her salary stayed static.

“There was a point in my life at which I believed I was born to be an analyst,” said Lee. “But as time passed, I felt that I was not compensated enough compared to the time and effort that I was putting into the job, so I decided to join the FIRE movement.”

For other young workers in Korea, it is about exercising more agency in their lives.

“While I was satisfied with my job, I chose financial independence because it gave me more freedom to pursue things that I’m passionate about,” said Yeo Shin-ook, a 39-year-old who joined he FIRE Movement three years ago after quitting her job as a designer at Samsung Electronics

“Offices are no longer seen as a place that individuals can develop or feel a sense of achievement,” said Kwak Geum-joo, a psychology professor at Seoul National University.

“People now perceive workplaces as a simple means to make money, and this is why so many strive for early retirement.”

She said that, while it may be unfortunate, the reality is that Korean society today “values capital more than labor.”