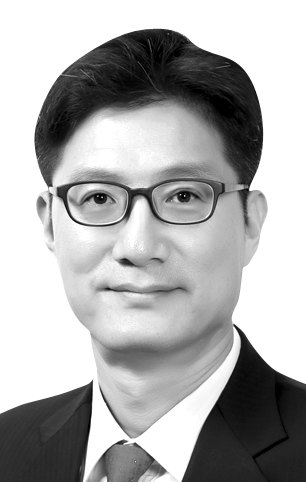 
“It’s not China twenty years ago, so they want to project what they have into its foreign policy, which is only natural. But I don’t know whether we should call it assertive or not, you know. They want to have their voices heard by other members of the international community, and we should — we should try to listen to what they have to say to us.”

The above quote sounds like comments from a diplomat from Pakistan, a key friend of China. But amazingly, the comments were made by the foreign minister of Korea. And they were made in the United States amid the heightened tension between Beijing and Washington.

In a conversation in New York hosted by the Council on Foreign Relations, Korean Foreign Minister Chung Eui-yong responded to the moderator’s comment that China has become more assertive in the past few years. Chung said, “Well, I think it is natural because China is becoming stronger, economically more powerful.”

When the moderator, journalist Fareed Zakaria, categorized Korea, Australia, Japan and the United States as a “non-Chinese bloc” in Asia, Chung negated the idea. “Well, Fareed, that’s the mentality of Cold War, like Chinese say,” he said. Chung also said later that choosing between the United States and China is not a choice Korea will be forced to make.

The foreign minister was refuting the U.S. foreign policy to pressure China by promoting the Quadrilateral Security Dialogue (QUAD) among the U.S., Japan, India and China and the Aukus, a trilateral security pact among Australia, the UK and the U.S.

After he faced criticism for acting like a spokesperson of China, Chung said it is undesirable that a bloc of countries targets a specific country. “Just because I was in the United States, should I have not said that?” he said. “Many countries showed concern that China is coercive, but I don’t think China is coercive to us.”

Is he saying China is not coercive to Korea? That is nonsense. Chung tried hard to forget what China had done to South Korea after it decided to allow the deployment of the U.S. Terminal High Altitude Area Defense (Thaad) missile defense system in 2016. At the time, China issued a strict ban on importing Korean cultural products such as K-pop, TV dramas and shows. Beijing imposed a massive boycott against Korean companies in China. Lotte Group, which offered the Thaad base site in Seongju, North Gyeongsang, underwent a massive tax investigation in China.

Furthermore, it is extremely serious that Chung is treating China and the United States equally. America is a democracy where individual people’s rights and freedom are guaranteed, while China is a one-party dictatorship and a totalitarian state. As we have seen in China’s oppression of Hong Kong’s efforts for democratization, Korea’s values can hardly reconcile with the ideology of the Communist Party of China (CPC). Furthermore, China is promoting an expansionary policy to include its neighbors and the rest of the world into a new Sinocentric order. Countries threatened by this move have asked the U.S. for help, which led to the creation of the QUAD and the Aukus. 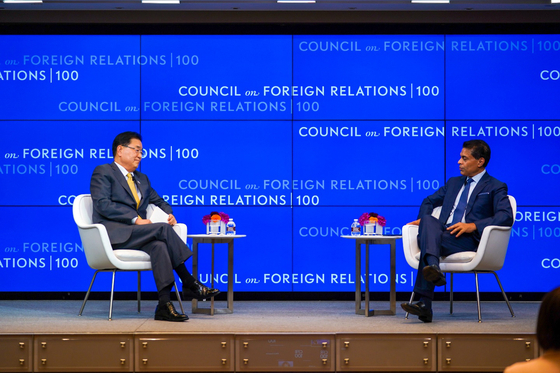 Foreign Minister Chung Eui-yong, left, is interviewed by Fareed Zakaria, a CNN host and political commentator, about the Moon Jae-in administration’s diplomacy at the Council on Foreign Relations in the United States, Sept. 22. [MINISTRY OF FOREIGN AFFAIRS]

Chung seems to believe that Korea will be safe from the new Sinocentric order — in contrast with India, Japan and Australia. But that’s sheer nonsense. The Moon Jae-in administration is treating the South China Sea dispute as if it were someone else’s business. But if China controls the waters, it will end up controlling Korea’s crude oil transportation route.

He said that strong interest groups are already working in the Korean business community to satisfy Beijing, which has secured friends and supporters among the communities of scholars, politicians and media leaders. His comparison of the reactions by Canberra and Seoul is shocking: while the Australian government tried to fight Beijing’s harassment, Korea’s political leaders are so freighted that they rush to maintain a weak attitude of ‘strategic ambiguity’ between China and the U.S. He also warned that if the Korean government naively believes it can protect the country’s sovereignty by keeping a close relationship with China, it is taking a risky gamble.