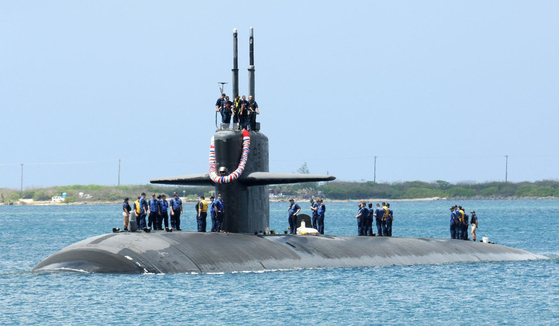 The nuclear-powered USS Oklahoma City at Naval Base Guam. [SCMP]

Commissioned in 1954, it was named after the submarine in Jules Verne’s novel Twenty Thousand Leagues Under the Sea. It used steam turbines propelled by nuclear fuel. As nuclear-powered submarines have an unlimited range, the amount of food loaded for the crew determines the radius of operation.

Nuclear submarines are the most threatening weapon. Nuclear bombs have not been used in real battles for more than half a century since the last one dropped on Nagasaki, Japan in 1945. The role of nuclear bombs is to check and show off. Meanwhile, nuclear submarines are operating somewhere in the sea even at this moment. Unlike diesel-powered submarines, they don’t’ have internal combustion engines and are very hard to detect.

The U.S. and Australia reportedly discussed a transfer of nuclear submarine technology at the G7 summit in Cornwall, UK in June. They had a secret conversation without France, just like a stealth submarine. The nuclear submarine security alliance connecting the U.S., Australia and the UK is likely to greatly distort the invisible security axis across the Pacific Ocean.

Meanwhile, there are voices calling to build nuclear submarines in Korea. With world-class nuclear reactor and shipbuilding technologies, it is not impossible. But a greater issue would come after the nuclear submarine is built. How would Korea convince China, whose stance would be narrowed by the launch of the Aukus? An arms race in Northeast Asia is inevitable. As the security axis in the Pacific is rapidly changing, where should Korea be headed?