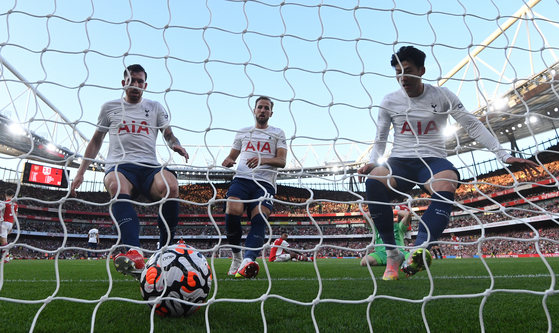 Son Heung-min, right, scores Tottenham Hotspur's only goal in a 3-1 loss to Arsenal in London on Sunday. [EPA/YONHAP]


Son Heung-min provided a brief moment of excitement in an otherwise disappointing performance for Tottenham Hotspur on Sunday, scoring the only goal in a 3-1 loss to local rivals Arsenal.

Son's 79th-minute goal came far too late in the game to make any meaningful impact on the score — Arsenal had been 3-0 up since the 34th minute — but it at least signaled that the Korean striker is starting to produce again after struggling with injury following the international break.

Outside of that single goal, Son and teammate Harry Kane both faced criticism from pundits for their ineffective play throughout the game. Kane, in particular, appears to have carried his failed push for a transfer into the season, offering little practical offense.

With the loss, Tottenham now have the dubious honor of being only the second team in Premier League history to win their first three games of the season and then immediately drop the following three.