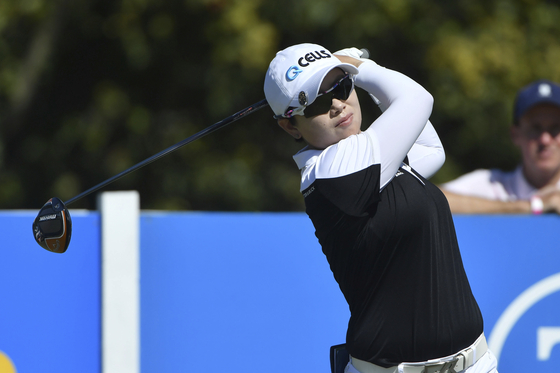 Ji Eun-Hee watches her tee shot on the 10th hole during the final round of the LPGA Walmart NW Arkansas Championship golf tournament on Sunday at Pinnacle Country Club in Rogers, Arkansas . [AP/YONHAP]


Ji Eun-hee finished tied for second at the 2021 Walmart NW Arkansas Championship at Pinnacle Country Club in Rogers, Arkansas on Sunday, alongside Minjee Lee of Australia.

Despite holding on to the lead after the first two rounds and carding a bogeyless third and last round with an eagle on the par-5 14th and two birdies on Sunday, Nasa Hataoka of Japan, who had five birdies and one bogey on the last day, was the one to take the trophy, outplaying Ji by one stroke.

Ko Jin-young ended in a tie for sixth at 12-under-par, 201. Eight players tied for eighth at 11-under-par, including 2017 Walmart NW Arkansas champion Ryu So-yeon, who notched a 9-under-par, 62 on the last day, birdying 10 holes and bogeying one for the round of the week.

“I had 10 birdies today," said Ryu, who originally set the tournament 18-hole scoring record back in 2017. "You know, was really kind of feeling bad to make that the second hole, because that was three-putt. But it was really, really great to have a super low round. Haven't done it for a while. And then it's definitely help me out to gain some confidence."