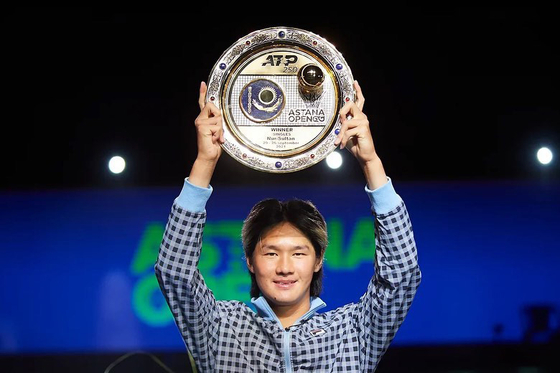 Kwon Soon-woo poses with the trophy after winning the Astana Open in Nur-Sultan, Kazakhstan on Sunday. [NEWS1]


Kwon Soon-woo won his first ATP Tour title at the Astana Open on Sunday, beating James Duckworth of Australia in straight sets in the final to claim the title.

Kwon is the first Korean to win an ATP Tour title since Lee Hyung-taik, who won the Sydney International in 2003. Kwon and Lee are the only Koreans ever to win on the sports top-tier tour.

Kwon beat Duckworth 7-6, 6-3 in the final in Nur-Sultan, Kazakhstan, relying on a dominant serve to give him an edge over the Australian. With the win, Kwon climbs from world No. 82 to 57, while Duckworth moves up from No. 65 to 56.

Kwon took down a run of higher-ranked players en route to the final, beating world No. 35 Dusan Lajovic of Serbia in the round of 16, world No. 49 Laslo Djere in the quarterfinals and world No. 34 Alexander Bublik in the semifinals. The Korean dropped just two sets — one each to Bublik and Djere — throughout the entire tournament.

Kwon got off to a strong start to the year, winning the ATP Challenger Tour Biella 2 in February and going on to take on Novak Djokovic at the Serbia Open before reaching the third round of the French Open, his best grand slam performance to date.

Since Wimbledon in July, where Kwon reached the second round for the first time, Kwon had gone quiet, crashing out of the French Open in the first round and struggling at the Tokyo Olympics. Sunday's win at the Astana Open marks a strong return to form for the 23-year-old and a good sign of bigger things to come in the future.

Kwon flew to Kazakhstan for the Astana Open from the United States, where he represented Korea in the 2020-21 Davis Cup, alongside Nam Ji-sung and Song Min-kyu. Korea beat New Zealand 3-1 to progress to the 2022 qualifiers.

"I was ready to say that I lost [in Kazakhstan] because of jetlag," Kwon joked after the Astana Open final on Sunday, "but I didn't have a problem adjusting. I was able to quickly adapt to the atmosphere and environment of the venue.

"I entered this tournament planning to just play comfortably, but when I reached the final, the win was at stake. Looking back, I was very nervous in the beginning, but I tried to maintain a poker face and I think that's why I got good results."