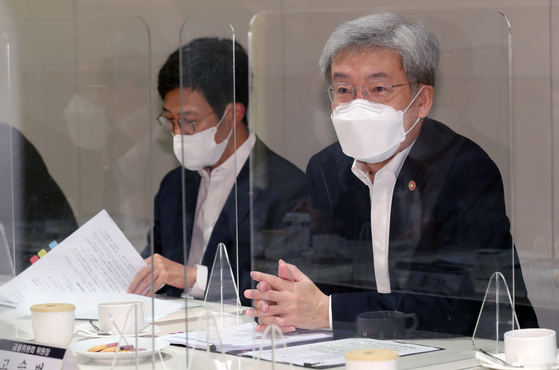 Koh Seung-beom, chairman of the Financial Services Commission (FSC), talks with the heads of financial regulators on Tuesday during a meeting held at the Korea Federation of Banks in central Seoul. [NEWS1]


The Financial Services Commission (FSC) will tighten household lending through next year, FSC chairman Koh Seung-beom said on Tuesday during a meeting with heads of financial regulators.

It will focus on loans from banks and private lenders, including mortgages, but not credit card debt.

"This is the time we should seek an orderly exit from the Covid-19 crisis," Koh said. "We will come up with safety measures for the less affluent and manage things so as not to damage the stability of the financial system.”

Koh said state-owned financial institutions should worry about the less affluent as well as the financial industry, after carefully weighing the causes of financial imbalances, such as rising household debt and asset bubbles.

Protective measures could include extending loans or delaying repayments, and other measures to prevent smaller companies from becoming insolvent or being buried in debt.

Earlier on Monday, Koh vowed that the FSC will “extend the timeline of our household debt quantity control until next year and onward” until the regulations start to take effect.

“We have all come to the agreement that household debt must be controlled with stricter measures,” Koh said.

According to the FSC, households took out 1,710.3 trillion won ($1,447 billion) in loans during the January-to-July period, 71.6 percent higher than the same period last year.

The FSC had been relatively relaxed about rising household debt this year because of the Covid-19 pandemic. But since his inauguration on Aug. 31, Chairman Koh announced that the FSC will be coming up with 20 to 30 regulations to “control,” or reduce, household debt.

“Because the problem with household debt has been building up and getting bigger over a long period of time, the process of reversing that will take time and be uncomfortable,” Koh said on Monday, adding, “but we will push forward with a strong will and with consistency.”

Koh set the FSC’s goal for this year at 5 to 6 percent on-year growth in household debt. To fulfill the goal, local banks have recently been lending less and increasing interest rates. 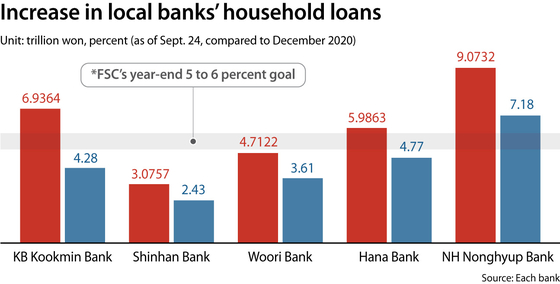 NH Nonghyup Bank stopped issuing mortgages in August. This could result in people taking out other types of loans for real estate purchases, typically referred to as the “balloon effect."

As a result, KB Kookmin bank resorted to decreasing the amount it would lend in a jeonse loan relative to the value of the property on Aug. 29. The bank also stopped authorizing new mortgage credit insurance (MCI) or mortgage credit guarantee (MCG). MCI is insurance that protects a bank if a borrower defaults and MCG is a mortgage guaranteed by a third party. Hana Bank will also stop issuing new MCI or MCG from Oct. 1.

However, loan restrictions and higher interest rates are not enough to curb household debt, according to analysts.

“Jeonse loans or other housing loans are loans that people have no choice to take even if interest rates rise,” said an insider of a local bank who asked not to be quoted.

The Financial Supervisory Service (FSS) met with brokerages on Sept. 24 and ordered them to lend less. Brokerages can lend an amount of money equivalent to their equity, which is referred to as the credit granting cap. Brokerage firms will be expected to decrease the cap to 80 to 90 percent of their equity following the order.

"We are at a stage where we're looking at a number of different issues and so we have not come up with a detailed plan yet," Koh said.