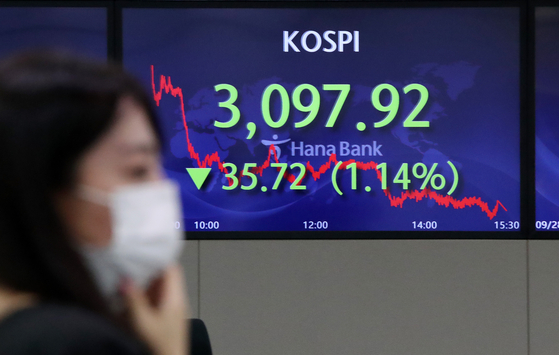 A screen in the Hana Bank's trading room in central Seoul shows the Kospi closing at 3,097.92 points on Tuesday, down 35.72 points, or 1.14 percent, from the previous trading day. [NEWS1]

The local index got off to a weak start, tracking overnight tech losses on Wall Street.

"The rise in U.S. Treasury yields hurt U.S. tech shares, which in turn, had an impact on the local market," Kim Seok-hwan, an analyst at Mirae Asset Securities, said.

The continued surge in Korea's daily virus cases after an extended holiday last week also dampened investor sentiment. The daily figure remained in the 2,000s for a third day Tuesday.

Daishin Securities analyst Lee Kyoung-min added the local index was also weighed down by a string of investor concerns, including default risks surrounding Chinese property giant Evergrande as well as the lack of progress in U.S. debt ceiling talks.

HYBE, the company behind global K-pop star BTS, added 1.98 percent to 283,500 won after it said the group will hold a series of concerts in the United States later this year, the septet's first live concerts since 2019.

The local currency closed at 1,184.4 won against the dollar, up 7.6 won from the previous session's close.