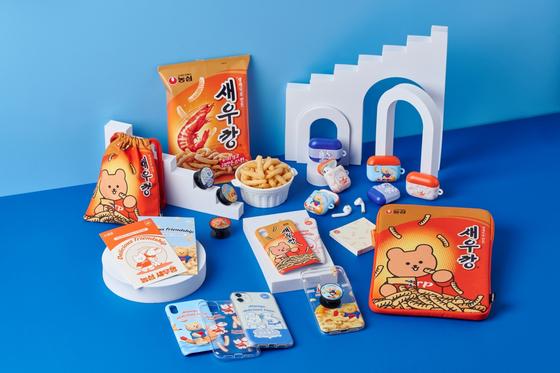 
In a collaboration to beat collaborations, a brown bear character on a laptop case holds an iconic shrimp chip.

This is just one of many possibilities resulting from the joint efforts of Nongshim, the big noodle maker, Bind, a Korean fashion brand, and Earp Earp, a stationary company.

The three are bringing together illustrations of Nongshim’s famous Saewookkang shrimp-flavored chip and Earp Earp's bear for phone cases, laptop pouches and PopSockets — those doohickies on the back of phones that provide a better grip.

Many food companies are leveraging up their intellectual property by working with merchandise companies.

The ramyeon brand has recently been collaborating with various other apparel companies as part of its Camping Market event. T-shirts and hoodies made with fashion brands such as Vivastudio and Mahagrid featuring logos of its Neoguri and Ansungtangmyun ramyeon have been sold at Bind's store nationwide since Sept. 17. 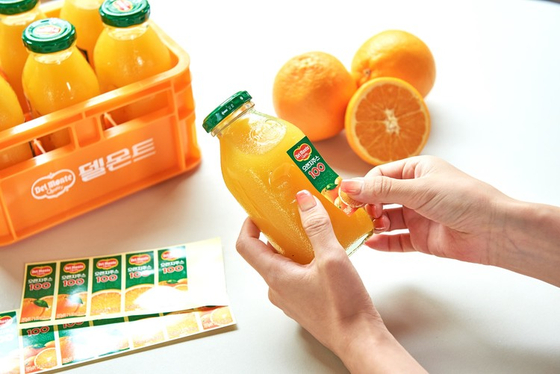 Budweiser, sold locally by OB, partnered with apparel brand The Internatiiional in July to release T-shirts and snap back hats.

“We hope the release will bring back the analog vibe for our customers and convey ‘newtro’ feels,” said a spokesperson for OB. Newtro is a portmanteau of the words new and retro.

Del Monte has been selling a set of six 250-milliliter (8.5 ounce) glass orange juice bottles and a plastic crate with the juice maker’s logo from early September.

The merchandise set was sold online starting Sept. 7 and sold out on the first day. Del Monte restocked the juices on Sept. 27, but they were again sold out.

Food companies have been releasing merchandise to strengthen their brand identities and advertise their products. Selling in small quantities also helps, getting the attention of customers crazy for limited editions.

“Creating buzz and providing a little fun for the customers is more helpful to enhance brand image compared to normal advertisements,” said a spokesperson for one of the local food companies. “Popular merchandise generates notable sales even just by itself.”