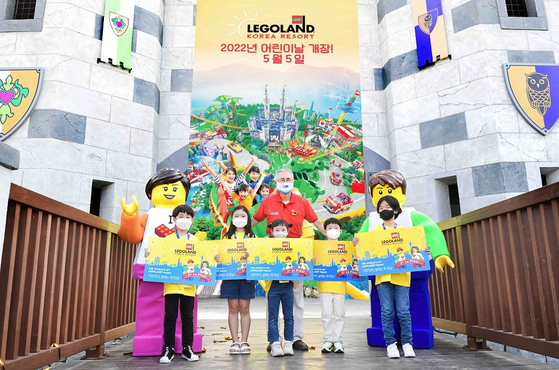 
Legoland Korea Resort will open in Gangwon next May with more than 40 rides and a dedicated hotel.

Legoland Korea Resort announced Tuesday that the Korean unit of the global theme park will start business next Children’s Day, or May 5.

It will be located on Jungdo Island in Chuncheon, Gangwon, which is around 75 kilometers (45 miles) from Seoul.

Legoland Hotel will have 154 rooms.

Legoland is a theme park brand inspired by Lego blocks. It is operated by Merlin Entertainments, a British company headquartered in Poole, England. Of the 527 billion won ($470 million) spent on the new Legoland in Korea, Merlin invested 447 billion won, according to local media reports. The remaining 80 billion won was invested by a local development company, Gangwon Jungdo-Development.


Legoland Korea Resort did not confirm exact figures for the investments.


The first Legoland opened in Billund, Denmark, in June 1968. Korea's will be the 10th and the third in Asia after Malaysia and Japan.

"Legoland Korea Resort will become a space that families conjure up when they plan to go on a vacation," said Kim Young-pil, Divisional Director of Legoland Korea Resort in an online press event held Tuesday. Visitors will include both children and adults that love Lego blocks.


Kim added that it will be “one of the most beautiful Legoland theme parks around the world as the first Legoland built on an island.”


Legoland Korea Resort will have seven different clusters, or areas, with different themes, including Lego Castle, Miniland and Bricktopia.

Construction is scheduled to be completed by October, although the hotel will take a little longer.

Hotel construction was halted after prehistoric ruins were discovered on the site. But it will open as scheduled next May.

Ticket sales will officially start on Sept. 30. Early birds will be offered yearly free passes for 149,000 won. People who subscribe to Legoland Korea Resort’s newsletter can buy a ticket starting on Sept. 29.

Legoland Hotel to open in Gangwon on July 1

Legoland Korea, a decade in the making, opens on Children's Day