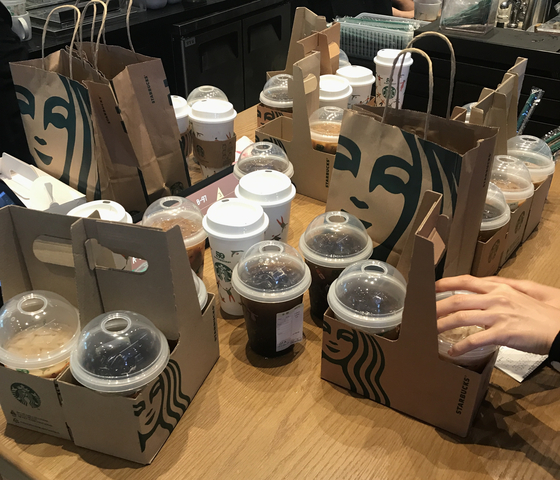 
Long lines formed at Starbucks stores nationwide as fans of the franchise and professional premium traders sought to get their hands on a limited-edition reusable cup being given away.

The cup, which is more substantial than a regular plastic cup but not quite as sturdy as a tumbler, is being given away globally to celebrate the 50th anniversary of the company.

Everyone who orders a drink made by a barista gets one, either a cup for hot or a cup for cold drinks. Those who buy canned or bottled drinks are out of luck.

The cups are offered in limited quantity and given on a first-come first-served basis. Customers are only allowed to order a maximum of 20 beverages to prevent resellers from cornering the market.

A line 200 deep was observed at a branch in Sangam-dong, Mapo District, western Seoul at 12:30 p.m. Customers were told it could take up to two hours to be served.

“I was going to get a coffee for my lunch break, but I’m not sure if I can make it back in time if the line is this long,” said Kim Yeon-hee, an employee working for a company in Mapo District, western Seoul.

A barista working for a Starbucks branch in Seodaemun District, western Seoul said at lunch time it is impossible to say how many reusable cups they have in stock, but “there is enough for now, but we might run out later in the afternoon.” 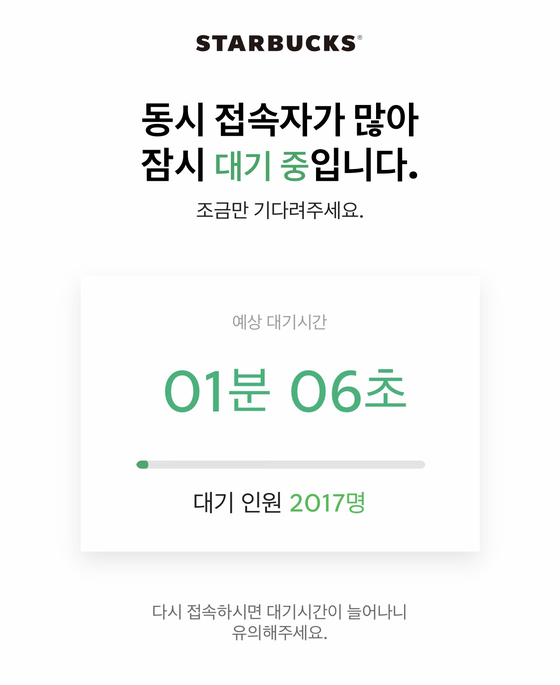 Starbucks' Siren Order application shows that there is an over one-minute wait, with 2,017 people waiting to get on the app. [SCREEN CAPTURE]

As of 12:00 noon, users had to wait over a minute to get on the application, with the app saying there are more than 2,000 people waiting in front of them.

Once the order was placed, customers had to wait between an hour and two hours to receive their orders. The orders were especially backed up in areas where many companies are located, with employees lining up to get their lunch coffees. 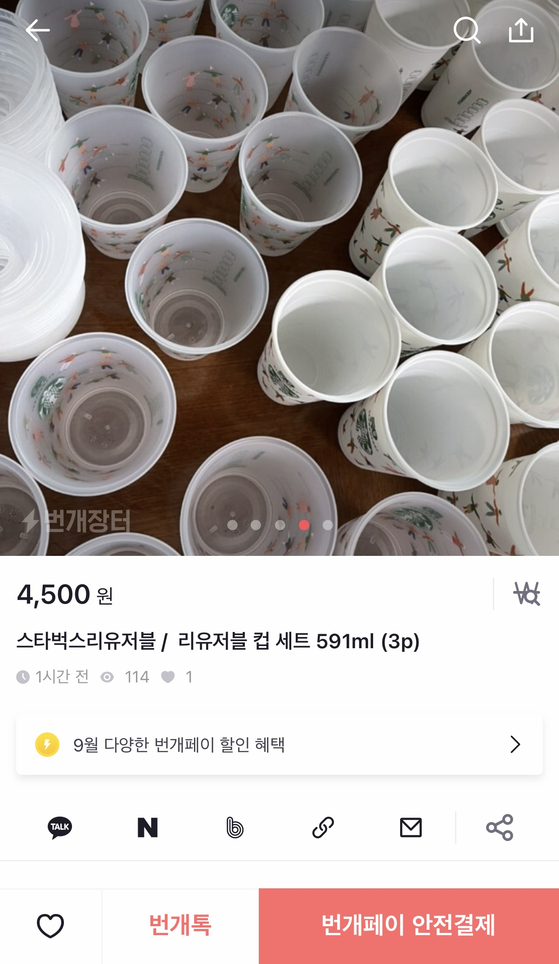 A user on Bungaejangter sells Starbucks' reusable cups for 4,500 won ($3.8) each. [SCREEN CAPTURE]


Starbucks cups and tumblers are often targeted by resellers due to being offered in limited quantities and because fans collect the merchandise. Lines are a normal sight when the coffee chain releases products for the cherry blossom season, Halloween and Christmas. The reusable cups were no exception. They have been hunted by resellers and appeared immediately on online secondhand marketplaces.

Following the massive hand-out of reusable cups, Starbucks Coffee Korea announced that its customers will be able to receive their drinks in personal reusable cups and tumblers brought from home starting Wednesday. Before, Starbucks coffee shops in areas where Level 4 social distancing measures are imposed didn’t pour the beverages into home-brought cups so its baristas and customers could avoid contact.