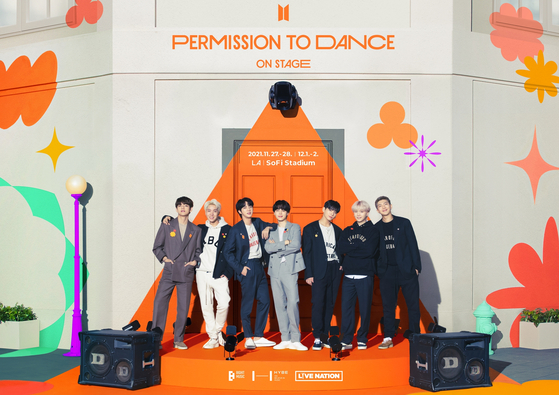 
Boy band BTS will hold its first offline concert in two years in the United States this November, according to Big Hit Music on Tuesday.

The agency announced via its fan community platform Weverse that the band will hold “BTS Permission to Dance On Stage – LA” in Los Angeles at the SoFi Stadium. The concert will have four runs: on Nov. 27 and 28 and Dec. 1 and 2.

Further information and tickets will be available on Weverse and www.ticketmaster.com.

This is BTS’s first offline concert since the final concert of its “Love Yourself: Speak Yourself Tour,” which was held in October of 2019 at the Seoul Olympic Stadium in Jamsil, southern Seoul.

BTS was scheduled to resume its “BTS Map of the Soul Tour” in April of 2020, but the world tour was eventually canceled altogether due to the prolonged Covid-19 pandemic.

“Although it was difficult due to the pandemic, we found an opportunity for an offline concert, taking local containment measures into account,” said Big Hit Music. “We will prioritize the health of our artists and fans. and do our best to present a high-quality performance.”

The SoFi Stadium has a capacity of over 70 thousand people. “BTS Permission to Dance On Stage – LA” is expected to be the first large-scale K-pop concert held abroad since the pandemic began.