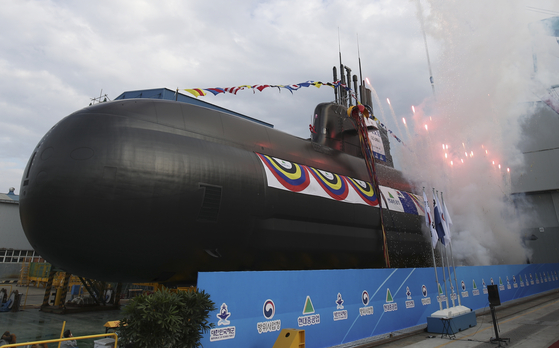 The Navy submarine Shin Chae-ho, the latest in the 3,000-ton Jangbogo-III Batch-I vessel class, is launched at the shipyard of Hyundai Heavy Industries in Ulsan, southeastern Korea, on Tuesday afternoon. [NEWS1]

Named after a prominent Korean independence activist, Shin Chae-ho, the new sub was launched in an afternoon ceremony at the shipyard of Hyundai Heavy Industries Co. in the southeastern city of Ulsan on Tuesday, according to the military.

The Shin Chae-ho is the third and final submarine in the Jangbogo-III Batch-I vessel class that the South Korean military has built and developed using domestic technology.

The 3.09 trillion won ($2.77 billion) project, which began in 2007, has yielded three submarines that can fire submarine-launched ballistic missiles (SLBMs).

The Dosan Ahn Chang-ho, the first in the class, was launched in 2018 and entered service last month. The second, the Ahn Mu, was launched in November and has a scheduled delivery date sometime next year, according to military officials.

The Defense Acquisition Program Administration (DAPA), which directs, oversees and provides support for the domestic defense industry, said that the Shin Chae-ho has a maximum crew capacity of 50 people and can operate underwater for 20 days without re-surfacing. The submarine will be deployed by the Navy in 2024 after it passes operational tests.

In a press release, the Navy said that the latest sub “is strongly capable of deterring provocations as it can be armed with SLBMs tested earlier this month.”

The Navy highlighted the fact that approximately 76 percent of the submarine’s components are locally manufactured, which allows for easier maintenance and other technological support without reliance on foreign parts.

The tests, conducted on Sept. 2 and Sept. 15, made South Korea the eighth country in the world to possess the weapon, which is widely paired with nuclear weapons, which the South does not possess.

Both times, an SLBM was launched from the Navy submarine Dosan Ahn Chang-ho off the coast of Taean, South Chungcheong. The tests took the form of cold launches, in which the SLBM’s engine ignites after it is first pushed out of the water with air pressure.

All of the Jangbogo-III Batch-I submarines, including the latest, have six launch tubes to fire SLBMs from underwater, enhancing South Korea’s missile deterrent capabilities.

South Korea’s development of SLBMs and submarines capable of remaining undetected for long periods of time comes as North Korea is upgrading its SLBM and submarine technology.

Pyongyang showcased a new type of SLBM, named Pukguksong-4, during a parade last October, while the Pukguksong-5 was unveiled in January. While experts believe that the North is also working to develop its own 3,000-ton class of submarines that can fire these missiles, they also believe the North has yet to succeed in underwater ejection tests.

For both countries, SLBMs are strategic weapons essential to maintaining retaliatory or second strike capability in the event of a nuclear attack. They are more difficult to detect than ground-based intercontinental ballistic missiles (ICBMs), which require launching facilities that can be more easily detected through satellite and air reconnaissance.