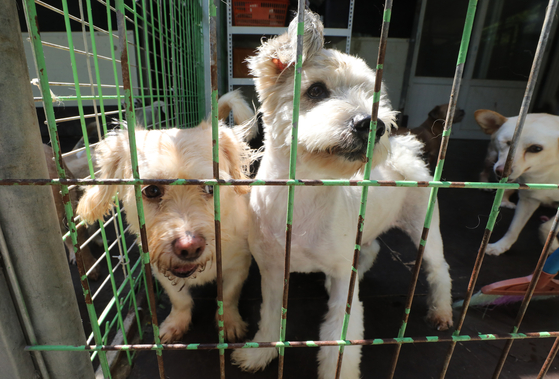 Abandoned dogs at a shelter in Namyangju, Gyeonggi, on April 25. [NEWS1]


Korea should consider banning dog meat consumption altogether, President Moon Jae-in said in a weekly meeting with his staffers at the Blue House on Monday.

Moon was being briefed about the latest situation of abandoned dogs and cats in Korea by Kim, who, on Thursday, will announce several policies to protect animals at shelters.

Last year alone, more than 130,000 dogs, cats and other pets were abandoned in Korea, according to the Animal and Plant Quarantine Agency, based on their research with local government offices and animal shelters. The number has been on a steady rise in recent years, rising from around 102,000 in 2017 and 121,000 in 2018.

Of the rescued pets in 2020, around a quarter of them were adopted, another quarter died of natural causes, and 21 percent were euthanized. Around 12 percent were returned to their original owners and 11 percent remained at shelters.


Dogs took up the majority of these rescue animals, at 75 percent.

Cases of animal shelters, which were supposed to protect the abandoned dogs, selling them to be made into dog meat have previously made headlines in the local news, drawing outcries from local animal rights activists. 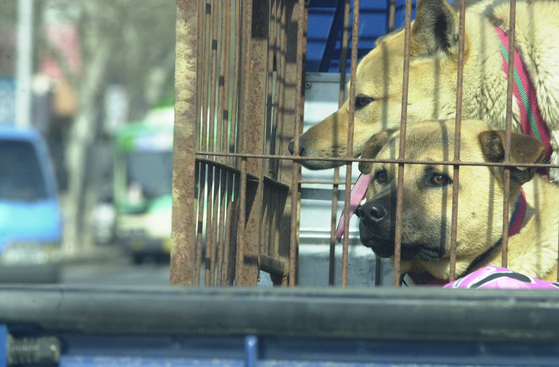 Dogs in a cage being transported in Daegu in this file photo in July 2017. [CHO MUN-KYU] 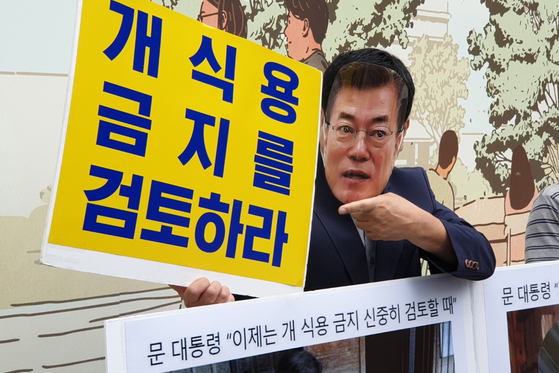 Local animal rights activists hold a rally at the Gwanghwamun Square in central Seoul on Tuesday to call for the banning of dog meat consumption in the country. One activist, wearing a mask of President Moon Jae-in, is holding a sign that reads, "Review banning dog meat consumption." [YONHAP]


Lawmakers have been working to ban dog meat consumption in Korea for years, but the battle was never won, as there are stakeholders on the other side of the equation — the dog meat producers, restaurants and their consumers.

In a public poll conducted by Realmeter in 2018, 51.1 percent of the population opposed banning dog meat consumption.

The most recent bill to ban dog consumption in Korea was proposed by a group of lawmakers including the ruling Democratic Party (DP) Rep. Han Jeoung-ae in December. The bill is sitting at the Assembly for review. 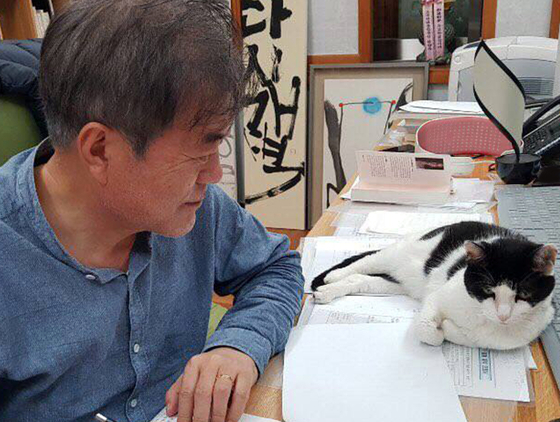 President Moon with his rescue cat at his home in February. [BLUE HOUSE]


Banning dog meat consumption was not part of President Moon’s official campaign, but he did address the issue several times during his campaign. Moon and his family take care of a family of Pungsan dogs, some of which was gifted to Moon from North Korean leader Kim Jong-un during their summit in 2018, and a cat and a dog, both rescued and adopted from shelters.

“President Moon’s comment is good news for the civil society that aspires to end dog meat consumption,” said Korea Animal Rights Advocates, a civic group, in a statement on Monday. “In Korea, where 1 million dogs are slaughtered annually, the end of dog meat consumption is not something that can be achieved by just civic groups or individual citizens. It will be necessary for the country to make a decision at the national level.”

“Today, President Moon Jae-in has instructed relevant ministries to ‘review banning eating dogs’ and I think this is a necessary move and one that should be greatly welcomed,” wrote Gyeonggi Gov. Lee Jae-myung, one of the DP contenders for the presidential election, on his Facebook account Monday.

Choo Mi-ae, former justice minister and a presidential hopeful, also posted on Facebook her support for the banning of dog meat consumption in Korea on Monday.

Yoon Seok-youl, the former prosecutor general and a presidential hopeful of the opposition, has been running an Instagram account just for photos of his dogs since he launched his campaign.

Korea is home to an estimated 15 million dog and cat owners, around a third of the country’s population. 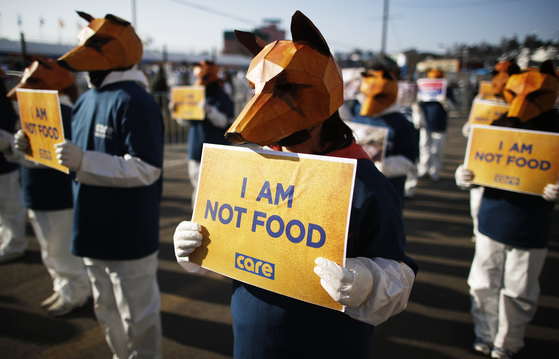 Animal-rights activists stage a protest against the consumption of dog meat near the Pyeongchang Olympic Stadium a few hours before the closing ceremony of the PyeongChang 2018 Olympic Games on Feb. 25, 2018. [EPA/DIEGO AZUBEL/YONHAP]