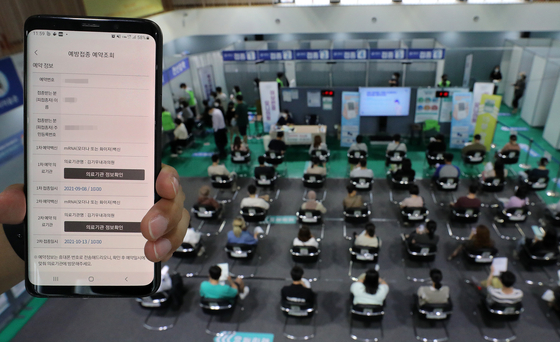 Patients wait for any adverse reactions after their vaccinations at a local gym in Seodaemun District, western Seoul, on Tuesday afternoon. The screen of the mobile phone being held up shows the vaccination registration information of an unidentified person. [NEWS1]


Korea hopes to relax its social distancing measures, especially for the vaccinated, by late October and may even introduce new "vaccine passes," said Health Minister Kwon Deok-cheol during a meeting with the press on Tuesday.

“We are reviewing measures to ease the distancing guidelines for private gatherings of fully vaccinated people and also for their use of public facilities,” Kwon told a group of reporters at a conference hosted in Yangcheon District, western Seoul, on Monday.

Kwon said that the relaxation of social distancing measures will start around the end of October, when around 90 percent of the elderly and 80 percent of the general population are expected to be fully vaccinated.

The rest of the country under Level 3 measures still bans gatherings of more than four people at all hours. The gatherings can, however, contain up to eight people if there are no more than four unvaccinated people.

These measures have been in place for months since early July when Korea entered its fourth and biggest wave of the pandemic.

Kwon mentioned using a type of vaccine pass similar to that which is being implemented in Germany that could work for Korea.

“In Germany, there is a type of vaccine pass that allows the use of public facilities for those who are fully vaccinated, those who have recovered from infections, and those who have tested negative in a diagnostic test,” Kwon said. “I think we could apply this as well.”

Kwon added that these transitions, part of what the Korean government calls its “With Corona” strategy, will include paying more attention to severely ill patients rather than focusing on the total number of Covid-19 patients.

The “With Corona” strategy used in Korea is similar to the "With Covid" strategy being discussed in other countries around the world.

“Rather than strengthening or relaxing measures based on the total number of Covid-19 patients, the country could use the rate of those in critical condition and the death rate as the index to determine distancing measures,” Kwon said, adding that the government may expand its at-home care for Covid-19 patients with mild symptoms.

In some cases, young Covid-19 patients with mild symptoms were allowed to quarantine at home and regularly report their conditions to health authorities. 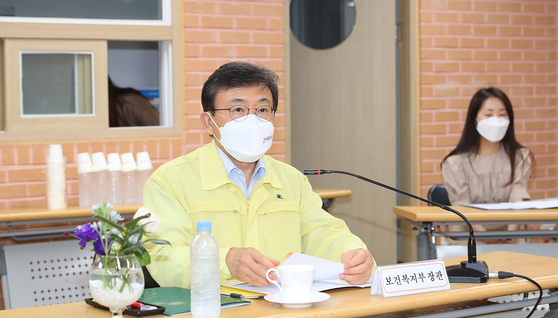 
But cases in Korea are spiking again, following the Chuseok holidays when traveling and family gatherings took place throughout the country.

Korea added 2,289 new cases on Monday, the highest daily count recorded on a Monday since the onset of the pandemic. Of the local cases, 837 were based in Seoul, 718 in Gyeonggi, 123 in Incheon, 126 in Daegu and 136 in the Gyeongsang regions, according to the Korea Disease Control and Prevention Agency (KDCA).

Growing clusters being watched by health authorities include one traced to the Garak Traditional Market in Songpa District, southern Seoul, which added 26 cases on Monday, bringing the total caseload to 746; a cluster traced to the Soonchungyang University Hospital, which grew to 77 as of Monday, including 47 medical staff members and 15 patients; and a cluster traced to a gathering of foreign residents in Daegu which added 55 cases Monday, bringing the caseload to 375.

The total number of Covid-19 cases in Korea came to 305,842 as of Monday, of which 32,450 were being treated in hospitals or similar facilities. A total of 324 patients were in critical condition, and eight people died on Monday, bringing the total death count to 2,464 and death rate to 0.81 percent.

As of Monday, 75 percent of the population had been given their first shot of vaccine and 46.6 percent were fully vaccinated, according to the KDCA. The country will begin inoculating minors aged between 12 and 17 and pregnant women next month and dole out booster shots for people aged 60 and up and front-line medical workers.