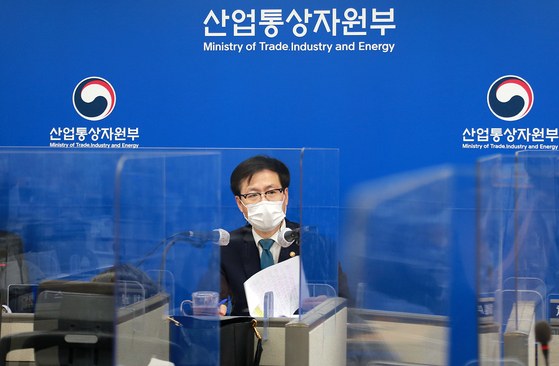 Trade Minister Yeo Han-koo, who started office last month, briefs media on his recent visit to the U.S. in meeting with White House officials and U.S. Trade Representative Katherine Tai at the Ministry of Trade, Industry and Energy's office in Sejong on Wednesday. [MOTIE]

New Korean Trade Minister Yeo Han-koo said he asked Washington to offer the same investment incentives to Korean companies that it offers its own.

“The U.S. congress is still discussing and yet to confirm an incentive system for key industries such as semiconductors,” Yeo said at a press conference Wednesday following a trip to the U.S. "[However], I argued the need to apply the same incentives to major investments in core industries by Korean companies as they do American companies when meeting with White House officials, U.S. Trade Representative [Katherine Tai] as well as 14 to 15 congressmen.

“We plan to closely follow events until the U.S. makes a decision on its policy direction,” Yeo said.

Yeo said the Korean government was well aware of concerns by Korean companies including Samsung Electronics and SK hynix of pressure from the U.S. government on semiconductor companies to disclose sensitive information including inventories, orders and sales data.

During a semiconductor summit on Sept. 23, U.S. Commerce Secretary Gina Raimondo told global semiconductor companies to disclose more information on their supply chains to solve a shortage of chips for automobiles.

Raimondo told Reuters that if companies don't comply, the U.S. government have "other tools" to require them to give the data.

“However, the U.S. government has expressed that it is voluntary [and not mandatory],” Yeo said. “What we know is that our [Korean] companies are internally reviewing the situation.”

Yeo stressed that there was recognition in the U.S. of Korea’s potential as a major biopharmaceutical producer.

It was the first instance of a global vaccine materials producer committing to investing in a new manufacturing facility in Korea since the outbreak of Covid-19.

The DEPA currently has only three members: Singapore, New Zealand and Chile.

“Digital trade is an important area for future trade,” Yeo said. “As a traditional IT power country, we are hoping to actively lead [in that area].”

Yeo said the EU has proposed signing a digital partnership with Japan and Singapore as part of its Indo-Pacific strategy.

Yeo said he will be meeting with EU trade officials to talk more about the digital trade partnership on a visit to EU headquarters in Brussels next week.