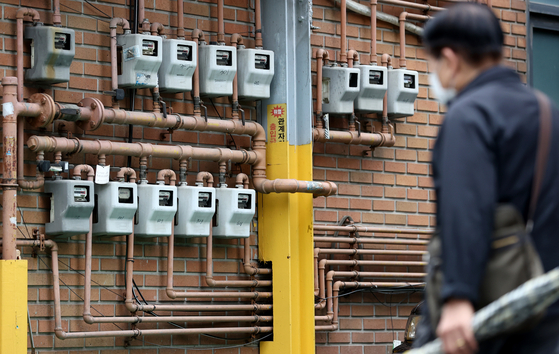 Gas meter in front of an apartment in Seoul on Wednesday. The government has decided to freeze utility price other than electricity bill, which already has been decided to be raised in the fourth quarter, until the end of the year. While rising international raw material price including crude price and LNG price have been increasing pressure on the government to raise utility bills, there have been growing public frustration on the government’s handling of consumer price. [YONHAP]

We need “to review consumer price risk factors and take preemptive steps that will contain the spread of anxiety about consumer prices,” the vice finance minister said during a government meeting on consumer prices on Wednesday.

The vice finance minister stressed that there was no discussion about raising other public services costs, including train tickets or highway tolls.

“While the public bills imposed by the local governments are decided on their own, [the central government] headed by the Ministry of the Interior and Safety will negotiate so that those public bills are frozen in the fourth quarter,” Lee said.

The vice minister added that the government will closely monitor the prices of necessities, especially milk as milk producers have increased prices recently citing higher costs.

Lee said the government will “communicate” strongly with the milk industry so that the increase in milk prices, resulting from rising costs, will be applied gradually.

The government will work actively so that the increase in milk prices “will not start a chain reaction to other processed goods,” Lee said.

He added that the government will do its best to stabilize other prices, including those of eggs, rice and beef.

“We will come up with a joint plan from related government departments against those that disrupt the distribution order,” Lee said.

Since Kepco raised electricity prices for the first time in eight years last year, there have been growing concerns about its influence on the overall consumer prices especially on public utility bills.

Consumer prices have increased more than two percent on year in each of the past five months. It is the first time inflation has been above two percent for so many months since 2017.

This was a stark contrast to the government projection that consumer prices would stabilize in the second half.

In June, the government projected consumer price rises to average 1.8 percent this year.

Finance Minister Hong Nam-ki on Sept. 14, before the Chuseok holidays, said a Statistics Korea studies showed that consumer prices are stabilizing and said the government is doing its best to normalize prices.

Consumers price may rise for a sixth consecutive month due to the Chuseok holidays and the disbursement of government relief grants.