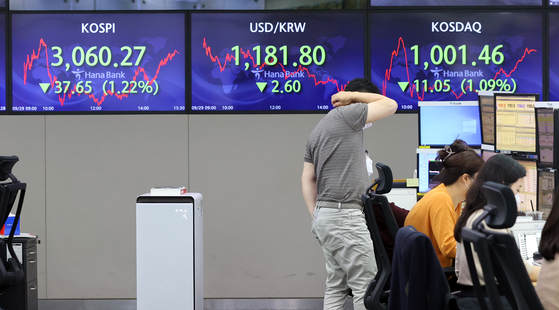 Korean stock markets tumbled Wednesday over fears of inflation in the U.S. The Kospi on Wednesday closed at 3,060.27, down 1.22 percent from the previous trading session. [YONHAP]


Inflation worries in the United States slammed the Korean stock market, pulling down both the Kospi and Kosdaq indices by roughly 2 percent during intraday trading on Wednesday.

The Kospi retreated by nearly 2 percent to below the 3,050-mark to around 3,030 during trading on Wednesday for the first time in roughly a month. At market's close, the index narrowed losses and ended the day at 3,060.27, down 1.22 percent compared to the previous trading day. On Tuesday, Seoul's main bourse tumbled 1.14 percent.

Korea's markets were rattled by recent comments by U.S. Federal Reserve Chairman Jerome Powell. In testimony delivered to the Senate Banking Committee of the U.S. Congress Tuesday, Powell said "inflation is elevated and will likely remain so in coming months before moderating."

Unlike past remarks describing inflation as transitory, Powell added that upward pressure on prices could be "larger and longer lasting than anticipated," particularly due to supply bottlenecks in some sectors.

Inflation worries and the more hawkish tone of the Fed chair pushed up the yield on benchmark 10-year U.S. Treasurys Tuesday by 6.2 basis points to 1.546 percent, after rising as high as 1.567 percent during trading, the highest level since June. The yield on 30-year Treasury note spiked to 2.094 percent, the highest level since July. Yields move inversely to prices.

There are other global uncertainties worrying investors around the world.

Ongoing political wrangling in the U.S. Senate over the federal debt limit is one. U.S. Treasury Secretary Janet Yellen warned lawmakers Tuesday that America could default on its debt for the first time in history unless Congress acts to lift the federal debt limit by Oct. 18. Republicans oppose a House-approved bill which includes a provision to suspend the debt ceiling.

Other risks come from China.

A possible default by China's Hengda Real Estate Group, the main unit of Evergrande, is one. A growing power supply crunch in China has cut production at factories and triggered a rise in commodity prices.

"Worries about global stagflation are looming," said Shin Dong-jun, chief strategiest at KB Securities. "Production shortages in the fourth quarter would not only slow growth of the Chinese economy but also push up inflation in major economies."

Stagflation is when there is high inflation with stagnant economic growth.