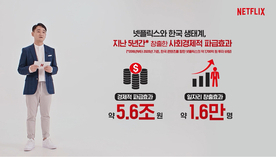 Kang Dong-han, vice president of Netflix Korea, explains that Netflix has contributed 5.6 trillion won ($4.73 billion) to Korea’s gross domestic product (GDP) and created 16,000 jobs in Korea since its entered the market in 2016 during an online press conference held on Wednesday. [NETFLIX]

Using figures from a report by a consulting company, Netflix claims to have added 5.6 trillion won ($4.73 billion) to Korea’s gross domestic product (GDP) and created 16,000 jobs since it came to the country in 2016.

“Since 2016, Netflix has invested 770 billion won in content production and an additional 550 billion won this year as well,” said Kang Dong-han, vice president of Netflix Korea, during an online press conference Wednesday.

“The Korean series recently released by Netflix have resonated not only in Korea but all over the world. For instance, ‘Squid Game’ has topped the U.S. Top 10 chart, a first for Korean content.”

At Wednesday’s “Netflix Partner Day,” the company highlighted the contributions it has made to the Korean economy. Local companies that participated in the production of original series also took part in the conference to share their experience working with Netflix.

According to a report produced by Deloitte Consulting Korea, the 5.6-trillion-won figure includes the revenue generated by production and distribution, as well as the follow-on effects of the spending, for example camera crews buying coffee between takes. 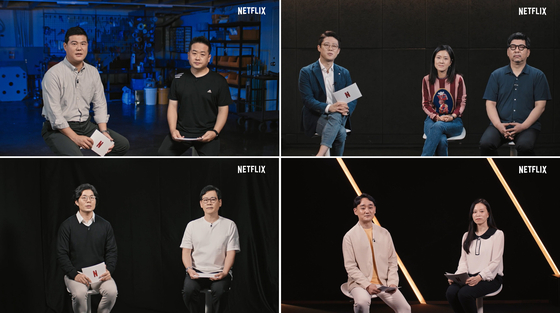 Netflix held the ″Netflix Partner Day″ on Wednesday morning where Netflix highlighted the contributions it has made to the Korean economy. Local companies that participated in the production of original series also took part in the conference to share their experience working with Netflix. [NETFLIX]

Many Netflix Korean originals are based on webtoons or web novels, such as “Sweet Home” (2020) and “D.P.” And 42 percent of people who watch Korean videos consume webtoons, web novels or music related to the videos. Viewership of webtoons and web novels that original series were based on surge by up to 20 times, according to the report.

Fans of Netflix originals like to visit the country where their favorite show was shot, so 1.86 trillion won was added for tourism. According to the Deloitte report, that number could have been 800 billion won higher had it not been for the Covid-19 pandemic.

“We are honored to be able to work together with the creators who are writing the new history of Hallyu,” Kang said, referring to the Korean wave. “Netflix continues to endeavor to present works with emotion and powerful stories that are unique to the Korean creative ecosystem."

Netflix has had a record year so far in 2021 in Korea, with 75.3 billion won of revenue from local subscribers in August. Netflix has 3.8 million paid memberships in the country.

"D.P." and "Squid Game," its two most recent releases, have been performing well in Korea and outside, with the latter topping the Top 10 TV Show list in 76 countries.