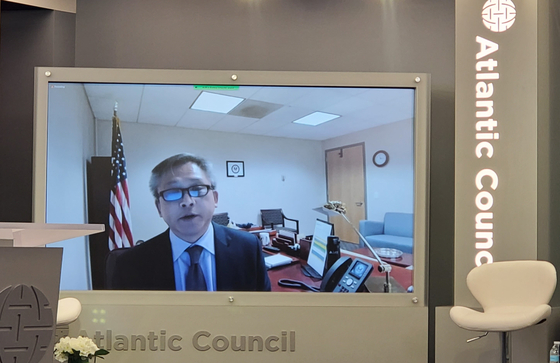 
More top U.S. officials on Asia reiterated they are willing to meet with Pyongyang “without any preconditions” on Tuesday, leaving the North’s repeated calls for certain preconditions largely unheeded.

“In reference to the DPRK, the top U.S. priority is to work toward the complete denuclearization of the Korean Peninsula,” said Kin Moy, principal deputy assistant secretary of state for East Asian and Pacific Affairs, speaking on Tuesday at a virtual forum hosted by the Atlantic Council and Korea Foundation.

Moy used the acronym for the full name of North Korea, the Democratic People’s Republic of Korea.

“To that end, we have reached out directly to Pyongyang to initiate dialogue and stand ready to meet without preconditions,” he said. “It’s on this basis that we hope the DPRK will come to the table to discuss our respective intentions and concerns and explore what progress may be achievable.”

The Joe Biden administration after completing its comprehensive review of North Korea policy in April said it will take a "practical and calibrated" approach to Pyongyang and has offered dialogue anytime, anywhere, “without any preconditions.”

Mark Lambert, deputy assistant secretary of state for Korea and Japan, reiterated the strategy during the forum.

“There is a misperception out there that we are not willing to talk to the DPRK, and that there are strings attached to our commitment,” said Lambert at the virtual forum. “That’s just not the case. We’ve made it very clear at all levels that we will go anywhere, anytime, no preconditions, to talk with the North Koreans. They have not responded.”

The statements from Lambert and Moy follow recent missile launches by the North. Moy said that while the U.S. government “condemns the DPRK’s recent ballistic missile launches,” Washington is “open to exploring meaningful confidence-building initiatives.”

Pyongyang, on the other hand, has repeatedly put forward conditions to meet with the United States, including ending the regular joint military exercises between Washington and Seoul.

“The issue of the Korean Peninsula has its origin in the U.S. hostile policy towards the DPRK,” said Kim Song, North Korea’s ambassador to the United Nations, in addressing the general assembly in New York on Monday. “The U.S. has annually staged all sorts of war drills on and around the Korean Peninsula and the Korean waters for the last several decades.”

Talks between Washington and Pyongyang have stalled since 2019. In their summit in Hanoi, Vietnam, North Korean leader Kim Jong-un reportedly asked former U.S. President Donald Trump for full sanctions relief. The summit fell through without an agreement.

Last week, the regime again called for a sanctions relief.

The Biden administration, however, has adhered to its principles of enforcing strict sanctions and not offering any incentives for the sole sake of talks with Pyongyang. The administration in June extended the sanctions on the regime, in place since 2008, for another year.

If there is any room for concessions, it will be on humanitarian grounds only, according to repeated offers of humanitarian assistance to the North from the U.S. government.

“Consistent with the Biden and Harris administration’s focus on human rights, we will advocate for the human rights of the North Korean people,” said Moy. “The United States will continue to support the provision of humanitarian aid, consistent with international standards for access and monitoring to the most vulnerable North Koreans regardless of progress on denuclearization.”