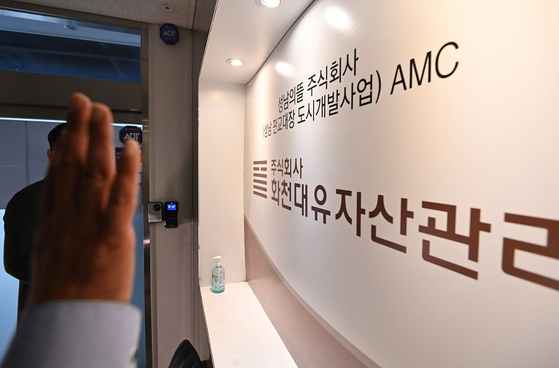 Prosecutors on Wednesday raided the offices of Hwacheon Daeyu, an asset management company at the center of a land development controversy in Daejang-dong of Seongnam, Gyeonggi. [NEWS1]


Prosecutors on Wednesday conducted their first raids in the probe into Hwacheon Daeyu, an asset management company suspected of receiving political favors and reaping outsized profits in the Daejang-dong land development project in Seongnam, Gyeonggi.

Prosecutors have also obtained a travel ban for Yoo Dong-gyu, former acting president of the Seongnam Development Corporation, and summoned Jeong Young-hak, the owner of Cheonhwa Dongin No. 5, for questioning in relation to the controversy.

The raids occurred as the scandal engulfed politicians on both sides of the political spectrum.

Allegations were first raised earlier this month that the ruling Democratic Party’s presidential frontrunner and Gyeonggi Gov. Lee Jae-myung gave preferential treatment to Hwacheon Daeyu, a small asset management company, enabling it to pocket tens of billions of won from a development project in Daejang-dong during his time as Seongnam mayor.

The company previously joined a 1.15-trillion-won ($981 million) project to develop 968,890 square meters (239 acres) in Daejang-dong in Seongnam, Gyeonggi, as residential real estate. Since 2019, Hwacheon Daeyu allegedly received a profit of 57.7 billion won on an investment of 49.95 million won — a mere 1 percent stake in the project.

While in office as Seongnam mayor, Lee supported the Daejang-dong development project, which he said would create housing for 5,903 families.

Lee is suspected of granting favorable treatment to the company because of his relationship with the company’s owner, Kim Man-bae, who previously interviewed Lee in 2014 — an allegation that Lee and his campaign have flatly denied.

Kim, who was questioned by investigators at Seoul Yongsan Police Precinct on Monday, has denied that his company profited from a special connection to the Gyeonggi governor, saying that his company actually saw losses from its investment in the Daejang-dong project.

However, those claims came under additional scrutiny when media reported Sunday that the son of main opposition People Power Party lawmaker Kwak Sang-do received a colossal severance payment from Hwacheon Daeyu after seven years of working at the company as a mid-level employee.

This led to suspicions that Kwak himself invested in Hwacheon Daeyu under another identity, and that his son's severance payment was an illegal payout for his investment. Both Kwak and his son denied the accusations.

Expressing concern for the party’s reputation in the lead-up to the March presidential election, Kwak tendered his resignation to the PPP, and his membership was terminated on Sunday.