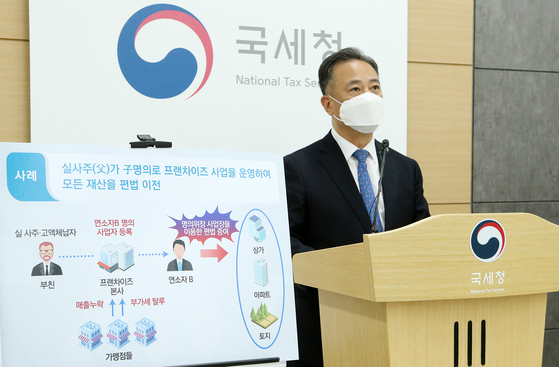 Park Jae-hyung, senior official on property taxation at the National Tax Service., brief on those suspected of tax evasion at the NTS headquarters in Sejong on Thursday. [YONHAP]

These are young people who were used by or received help from their parents in acquiring assets, including high-end real estate or company shares. Some used their parents to pay off their own debt through illegal means.

Among those investigated, the youngest was a two-year old.

“Those investigated are people who were able to acquire high-end assets despite their young age and lack of self-supplied income,” said Park Jae-hyung, a senior official on property taxation at the NTS. “We have spotted numerous suspects that made omissions in their tax reports despite getting help from their parents whether it was buying properties or financing their businesses through illegal means.”

Once case was that of a young suspect who despite having no income purchased a commercial building and an apartment in a new town. The real estate was purchased with money funneled through an e-commerce company that the father owned.

Some of the earnings generated from the e-commerce company were not reported to the tax agency.

The mother and the older brother are also suspected of purchasing pricey real estate through similar means.

In another case, a parent used inside information in financing the children’s investment in a real-estate private equity fund while failing to report inheritance tax.

According to the NTS, it is more difficult to track down the source of investment in the case of funds compared to real estate and stocks.

A 30 year old despite just starting out after graduating from school used family-owned real estate to get loans from a bank in starting a business. However, a parent was paying the interest on the loan. Later the apartment was sold, and the proceeds were used to pay off the principal.

However, no report on inheritance was made.

Those under investigation includes the head of a franchise company. Despite being blacklisted by the tax authorities for failing to pay tax, the franchise owner was running the company using the name of a 20-year-old family member.
The child purchased a commercial building and several pieces of land in the greater Seoul area through the profit made from the franchise business.

The tax authority accused the parent of dodging his or her own income tax while failing to properly report the earnings of the franchise business.

“Recently there has been a sharp increase of real estate purchases made by young people who are in their 20s or younger,” Hong said during a government real estate meeting on Wednesday. “As such, the tax authority is closely monitoring the situation including illegal inheritance.”

According to the government, in the first quarter of last year in Seoul, people in their 20s or younger accounted for 4.4 percent of real estate purchases. But in the first quarter, that ratio has jumped to 6.1 percent and in the second quarter it was 6.9 percent.