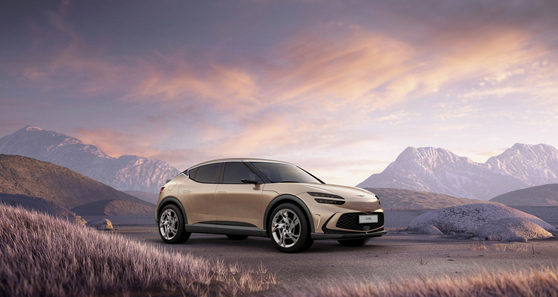 The Genesis all-electric GV60 will come with some wild technologies that weren’t available on Genesis, Hyundai or Kia vehicles before.

It is the first electric model from Genesis to be made on the E-GMP, a standardized electric vehicle (EV) configuration that will be used for all Hyundai Motor, Kia and Genesis models.

Orders will be taken in Korea from Oct. 6. The actual sales starting date has not been confirmed yet.

The GV60 SUV can recognize the driver’s face through what's called "face connect," similar to what’s being offered on some smartphones.

When someone touches the door handle, the face-connect function activates a camera located on the vehicle. If the system recognizes the driver’s face, it unlocks the doors and pops out the door handle. It is the first time for such a system to be introduced on Genesis models.

A maximum of two people can register in their faces. 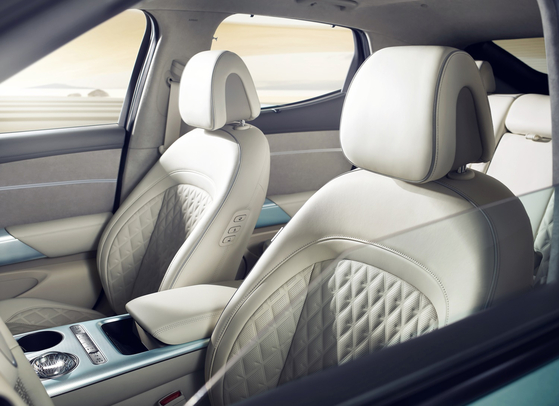 Inside of the GV60 [GENESIS]

The feature can be deactivated for those who are not happy having their biometrics stored in their vehicle. Drivers can also use an electronic key or their smartphone to open the door should face connect fail.

The vehicle is able to collect data from the camera and analyze it through a deep learning system so that even if the driver is wearing sunglasses or a hat, they can be recognized.

Once inside the vehicle, the driver can turn on the engine with a fingerprint recognition system.

“With the GV60, the driver can open the door and turn on the engine using just biometric data and without having to carry the car key. This will offer a new level of vehicle experience to the driver,” Genesis said in a release.

Before, the OTA system was only able to update data on navigation, heads-up display and infotainment.

The upgraded OTA system on the GV60 is able to update the domain control unit, which is like a brain for a vehicle, as well as the suspension, brakes, steering wheel and the advanced driving assistant system.

Genesis emphasized the performance of the all-electric model.

Styled as a coupe, the GV60 has a boost function that temporarily maximizes the car’s output. With a push of the “Boost” button placed next to the steering wheel, the car can generate output of 360 kilowatts, which translates to 480 horsepower, and is able to reach 100 kilometers per hour from zero in four seconds.

The boost function can be used repeatedly without breaks, according to Genesis.

For those who enjoy a wilder ride, the GV60 has an e-Active Sound Design function that delivers a fake engine roaring sound through speakers.

“The GV60 is the most dynamically designed model from Genesis,” said Chang Jae-hoon, global head of the Genesis.

“It will show a new standard in the luxury electric vehicle market by interacting with the driver and offering powerful driving performance.”