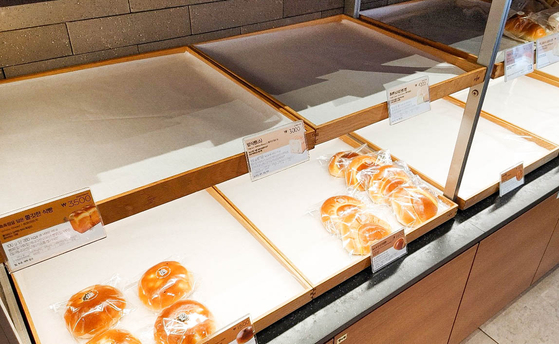 A display stand at a Paris Baguette store in Gwangju is almost empty. Due to the prolonged strike of delivery truck workers, stores have been having a hard time getting dough and other ingredients. [JANG JEONG-PIL]


Truckers are battling Paris Baguette, and the bakery chain said it is having trouble keeping bread on the shelves as a result.

“Since the Chuseok holiday, some bread and other ingredients are often not delivered at all, or given to us very late,” said a Paris Baguette franchisee in Yeongdeungpo District, western Seoul. “I’ve been going to the grocery store to buy some ingredients and making sandwiches myself because I can’t leave the display stand empty.”

In early September, unionized truckers organized by Korean Public Service and Transport Workers’ Union (KPTU) went on strike saying that they were dissatisfied with the routes they had received following the adjustments made to improve working conditions. They claimed that workers under another union, the Federation of Korean Trade Unions (FKTU), received better routes.

Paris Baguette is owned by Paris Croissant, which itself is 100 percent owned by Hur Young-in and his family, the controlling shareholders of KRX-listed SPC Samlip.

The company claims it is spending hundreds of millions of won each day to hire independent truckers to get ingredients needed to make bread and other bakery items. It wants the truckers on strike to pay compensation, which has resulted in more refusing to work. 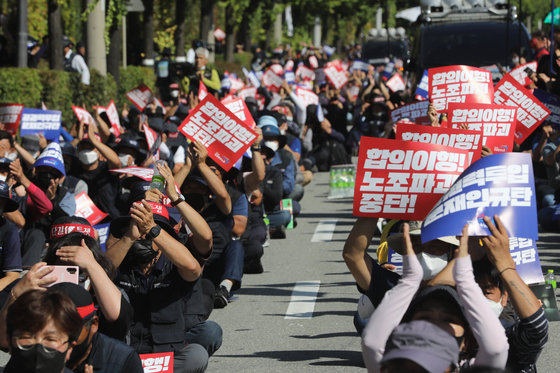 Some 1,000 members of the KPTU gather for a mass rally at SPC Group’s factory in Cheongju, North Chungcheong. [NEWS1]


On Thursday afternoon, members of the KPTU gathered for a rally at one of the company’s factory in Cheongju, North Chungcheong. Cars blocked the factory gates, and some 1,000 people sat at the roads to block traffic.

Paris Baguette says the workers should discuss the matter with transportation companies they are contracted under to solve the delivery problem, not them. Most of Paris Baguette’s truck drivers are hired by companies that provide logistics services to the bakeries.

“The KPTU went on strike because its truckers assigned profitable routes even though the issue is for transportation companies and truck drivers to negotiate with,” said a spokesperson for the company. “They’re now bringing in union members from other provinces to participate in the strike after they were refused to be exempt from compensating for damages.”

The corporation and the union battle it out, franchisees say they pay the price.

“The situation varies in different regions, but franchisees in Wonju, [Gangwon] even go to the distribution centers themselves to pick-up the products,” said Kim Dong-eok, vice president of a Paris Baguette franchisee union. “It’s double the struggle since they can’t sell anything when there’s no baked-goods, but still have to pay their employees.”

"I had to throw out a lot of the products because I didn't have fillings that went into the baked-goods," said a Paris Baguette franchisee with a store in Gwangju, "I'm afraid I might lose customers because I can't sufficiently supply group orders I received from kindergartens and schools."