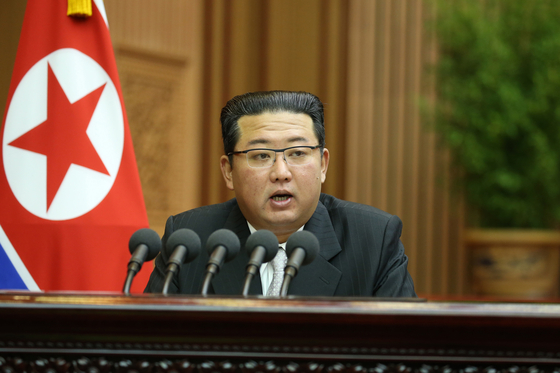 
“The U.S. is touting ‘diplomatic engagement’ and ‘dialogue without preconditions’ but it is no more than a petty trick for deceiving the international community and hiding its hostile acts and an extension of the hostile policy pursued by the successive U.S. administrations,” Kim said in a speech to the Supreme People's Assembly on Wednesday, according to an English-language statement carried by the North’s official Korea Central News Agency (KCNA).

It was the first time that Kim directly responded to the Joe Biden administration’s repeated calls for dialogue “without any preconditions.”

Kim added that the inter-Korean hotlines, which his government stopped using when relations deteriorated, will be restored in early October.

“The north-south communication lines that had been cut off due to the deteriorated inter-Korean relations are restored first from early October as part of the efforts for realizing the expectations and desire of the entire Korean nation to see the earlier recovery of the north-south relations from the present deadlock and durable peace settling in the Korean peninsula,” he said, according to the KCNA.

Military hotlines between the two Koreas were restored on July 27 after Pyongyang unilaterally severed them 18 months before.

Kim emphasized that the restoration of inter-Korean relations will depend on the “attitude of the South Korean authorities,” who should make a decision on whether to develop the relations “onto a new stage” or “keep the present state of worsening,” KCNA reported.