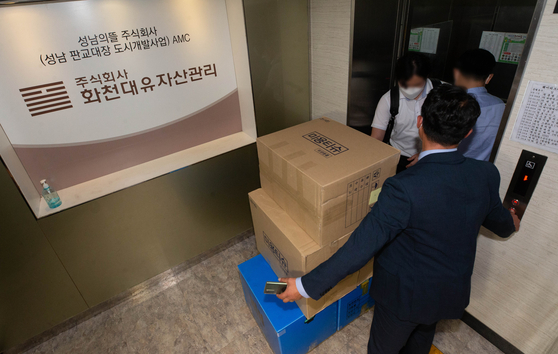 Investigators from the state prosecution service move materials collected in a raid on Hwacheon Daeyu's office in Seongnam, Gyeonggi on Wednesday. [YONHAP]


Prosecutors said late Wednesday that a key witness and investor in the Daejang-dong land development project provided recordings that detail discussions of potentially illicit payments for preferential treatment in profit distribution from the project.

According to a source in the prosecution service who spoke on the condition of anonymity, an accountant named Jeong Young-hak, who is also the owner of Cheonghwa Dongin No. 5 – an affiliate of Hwacheon Daeyu, an asset management company at the center of the scandal – submitted 19 recordings of conversations between Kim Man-bae, Hwacheon Daeyu’s owner, and Yoo Dong-gyu, former acting president of the Seongnam Development Corporation.

Allegations were first raised earlier this month that the ruling Democratic Party’s (DP) presidential frontrunner and Gyeonggi Gov. Lee Jae-myung gave preferential treatment to Hwacheon Daeyu, enabling it to pocket tens of billions of won from a development project in Daejang-dong during his time as Seongnam mayor.

The company had joined a 1.15-trillion-won ($981 million) project to develop 968,890 square meters (239 acres) in Daejang-dong in Seongnam, Gyeonggi, as residential real estate. Since 2019, Hwacheon Daeyu allegedly received a profit of 57.7 billion won on an investment of 49.95 million won — a mere 1 percent stake in the project.

Lee is suspected of granting favorable treatment to the company because of his relationship with the company’s owner, Kim Man-bae, who interviewed Lee as a journalist in 2014 — an allegation that Lee and his campaign have denied.

Kim, who was questioned by investigators at Seoul Yongsan Police Precinct on Monday, has denied that his company profited from a special connection to the Gyeonggi governor, saying that his company actually saw losses from its investment in the Daejang-dong project.

Jeong is known to have submitted the recordings when he was summoned for questioning by prosecutors on Monday.

According to the source in the prosecution service, Kim, Yoo and others can be heard in the recordings discussing the distribution of profits from the project as well as delivering a payment amounting to 1 billion won ($844,170) to an insider at Seongnam Development Corporation.

The recordings also supposedly reveal that the owners and main shareholders of Hwacheon Daeyu and Cheonhwa Dongin No. 5 gave 404 billion won in profits from the Daejang-dong development project and hundreds of billions of won in apartment sales revenue to officials at Seongnam Development Corporation.

Jeong also submitted photos that show hundreds of millions of won in stacks of cash to be given to the officials mentioned in the recordings, as well as data showing that money was delivered to people who worked for Seongnam Development Corporation.

The evidence provided by Jeong, if verified, could show that private companies lobbied and bribed Seongnam Development Corporation for preferential treatment in the Daejang-dong development project.

Jeong’s involvement in the Daejang-dong development project dates to 2009, when he and a lawyer named Nam Wook, the owner of Cheonhwa Dongin No. 4, participated in the drafting of a business plan when Hwacheon Daeyu joined in the private consortium led by Hana Bank.

According to the recordings Jeong submitted, Hwacheon Daeyu and seven individual investors invested 350 million won in the Daejang-dong development project knowing they could reap outsized profits from preferential treatment, cheap land prices and direct apartment sales with a mere 7 percent stake in the project.

Jeong himself invested 56 million won in the Daejang-dong development project as the main shareholder of Cheonhwa Dongin No. 5 and received 64.4 billion won in profits by the end of last year.

While Kim, Yoo and others whose companies are suspected of reaping outsized profits from the project were reportedly mentioned or heard speaking in the recordings, it has not yet been confirmed whether Lee Jae-myung, who was mayor of Seongnam at the time, is featured in the recordings.

Park Chan-dae, a senior spokesman for Lee’s presidential campaign, said Thursday, “We cannot address [allegations in relation to the recordings] because we don't know their content at all.”

Main opposition People Power Party (PPP) Chairman Lee Jun-seok said Thursday that he had seen a list of four people promised 5 billion won from Hwacheon Daeyu’s investment in the project, which included the names of individuals close to Lee Jae-myung.

Chairman Lee held an emergency press conference at the National Assembly on Thursday and said, “On the lists, there were also figures who are close to the Democratic Party, and those who were close to Gyeonggi Gov. Lee Jae-myung.”

However, the Hwacheon Daeyu is extending beyond the DP.

The media reported Sunday that the son of PPP lawmaker Kwak Sang-do received a colossal severance payment from Hwacheon Daeyu after seven years of working at the company as a mid-level employee.

The reports led Kwak to resign from the PPP on Sunday.

Meanwhile, the Seoul Central District Prosecutors' Office said it had set up an investigative team dedicated to probing suspicions of preferential treatment in the Daejang-dong project.

The team plans to analyze materials seized from more than 10 locations, including Hwacheon Daeyu and Seongnam Development Corporation’s offices, in addition to verifying the authenticity of recorded files and the photos provided by Jeong.