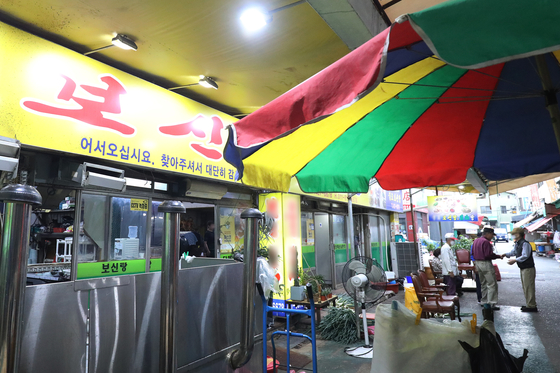 Dog meat business owners, after eating at one of the bosintang, or dog meat stew, restaurants in Chilseong Market in Daegu, discuss President Moon Jae-in’s recent remarks on a possible ban on dog meat. [NEWS1]


"President Moon Jae-in's remarks about a possible ban on dog meat were completely uncalled for," a dog meat seller in Chilseong Market in Daegu said on Tuesday. "Some people's livelihoods are at stake here."

Today, there are 14 locations that sell dog meat in the Daegu market.

But 40 years ago, the market was once regarded as a mecca for dog meat dishes, with over 50 dog meat restaurants booming with customers, especially during boknal — traditionally believed to be the three hottest days of the year between July and August — when older Koreans believed that they needed to consume bosintang (dog meat stew) or extract called gaesoju, made by boiling a whole dog, to invigorate themselves and reduce fatigue.

However, as awareness of animal welfare grew and more people became pet owners over the last couple decades, the demand for dog meat quickly plummeted.

"The few customers that we do get are usually men in their 60s and 70s, and we very rarely get customers in their 20s or 30s," said another dog meat seller at Chilseong Market.

Recently, two dog slaughterhouses inside the market closed down as well.

"I have done business here for decades now, and have no other means of earning money other than this," said a dog meat seller in his 60s.

"Shouldn't the government provide alternatives for people like us before telling us to shut down our businesses?"

A total of 45 domestic civic groups held a joint press conference in Seoul on Tuesday to express support for Moon's recent comment.

"It is high time that the government cracked down on this cruel industry," said a member of Korea Animal Rights Advocates, a non-profit organization that supports animal welfare in Korea, during the press conference.

"The government should strictly prohibit the distribution and sale of dog meat and carry out punitive measures on those who violate the ban."

The response among the public was starkly divided as well.

"Just as killing a cat and eating it is considered unorthodox in Korea, the same line of thought should be applied to dogs among people today," said Kim Ah-hyeon, a 31-year-old dog owner. "I am glad the government is finally reviewing a comprehensive ban on dog meat."

Thirty-five-year-old Yun, however, said he felt that Moon's comments on dog meat were inappropriate.

"While I don't eat dog meat myself, I still don't want the government regulating what I can and cannot eat," he said. "If the public perception of dog meat becomes negative enough, dog meat sellers will naturally disappear."

Moon on Monday mentioned that he wanted to review putting a ban on dog meat consumption in Korea during a briefing about a national system to regulate abandoned pets with Prime Minister Kim Boo-kyum.