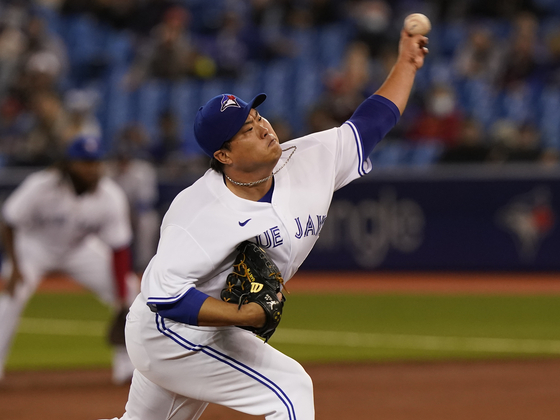 
Ryu Hyun-jin picked up his 10th loss of the season on Tuesday, marking the first time in his eight-year major league career that the Korean southpaw has found himself with double digits in the L column.

Adding insult to injury, that loss came in exactly the sort of game that the Toronto Blue Jays paid $80 million to bring Ryu on side for: A high stakes faceoff with a major rival and a Wildcard spot on the line.

Ryu gave up three runs on six hits in four and one third innings with three strikeouts and a walk against the New York Yankees on Tuesday. The Yankees, who are locked in a Wildcard race with the Blue Jays, Boston Red Sox and Seattle Mariners, went on to win the game 7-2, while Ryu was stuck with his 10th loss of the season for a 13-10 line.

Despite the loss, Ryu's performance didn't look too bad in his first game back after a brief stint on the 10-day injured list. The Yankees were unable to get anything across in the first two innings, while the Blue Jays took a 1-0 lead in the first.

Aaron Judge hit a solo homer in the third to tie the score at 1-1, but Ryu still appeared to be in control at the plate. The Blue Jays pulled ahead again the fourth, but Ryu gave up two singles and a walk to allow the Yankees to tie the score in the fifth. A sac fly followed, giving the New York club the a 3-2 lead and ending Ryu's time at the plate.

Further damage came later, with the Yankees piling on in the seventh and ninth to extend their lead to 7-2.

"He gave us a chance," Blue Jays manager Charlie Montoyo said after the game. "He did what we want him to do."

Ryu might have done what Montoyo wanted him to do, but he didn't do enough to help the team's playoff chances. Ryu has been struggling on the mound in the second half of the season, going 2-4 with an 8.10 ERA in the eight starts prior to Tuesday's game. His season ERA now stands at 4.39, the highest of his career for a full season pitched.

The Blue Jays went on to beat the Yankees 6-5 on Wednesday, putting them two games behind the Yankees and one behind the Red Sox for the two playoff spots with four games left to play this season.

After a final game against the Yankees on Thursday, the Blue Jays will finish their regular season with a weekend series against the Orioles.