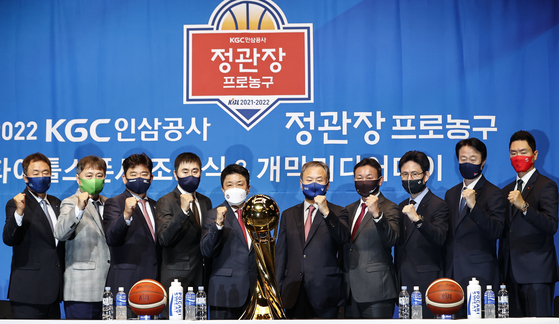 The managers of the 10 KBL clubs pose for a picture at a media day hosted by Anyang KGC Ginseng Corporation at the JW Marriott Hotel in southern Seoul on Thursday . [YONHAP]


The managers of Korea's 10 men's basketball clubs gathered for a media day hosted by reigning champions Anyang KGC Ginseng Corporation at the JW Marriott Hotel in southern Seoul on Thursday ahead of the start of the six-month Korean Basketball League (KBL) season that kicks off in 10 days.

Defending champion Anyang KGC took home the KBL championship title on May 9, winning the first four matches of the best-of-seven KBL championship series against the 2020-21 regular season winner Jeonju KCC Egis. Anyang was the first champion to be crowned in two years as the KBL decided last March to cancel the remainder of the regular season and the playoffs due to safety concerns surrounding the coronavirus.

Throughout KBL history, Ulsan Hyundai Mobis Phoebus has the most titles. They have won seven times, the latest being the 2018-19 season, and finished runner-up three times. KCC Egis has five wins and five runner-up finishes.


This season, all eyes are on the KT Sonic Boom, as six of 10 managers pointed to KT as the most likely to win this season, saying that their players are especially strong. At the media day event, KT manager Seo Dong-cheol chose "Sonic Boom season" as their slogan.

“I am determined to make this season ours, with good results, high popularity and sportsmanship," Seo said. "We will do our best.”

On Oct. 9, KGC will face KCC, the Orions will face SK and Phoebus will face the Phoenix. All three matches will take place at home.