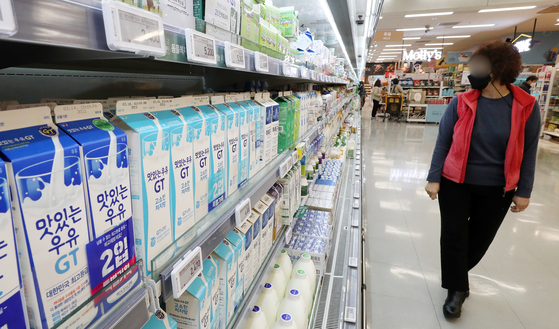 Namyang Dairy Products' Delicious Milk GT is displayed at a discount mart in Seoul. The company announced Friday that the retail prices of its products are increasing starting Oct. 14. [NEWS1]


Namyang Dairy Products and Binggrae are increasing the price of dairy products following recent hikes by other milk producers.

Namyang Dairy Products announced Friday that the retail price of milk will increase by an average 4.9 percent starting Oct. 14.

After the hikes, the company’s Delicious Milk GT, which used to retail for around 2,500 won ($2), will cost over 2,600 won, but the exact price could vary by type of store.

“The price increase was inevitable due to an overall increase in production costs such as raw ingredient costs, distribution costs and labor costs amid raw milk prices rising by an average 21 won per liter in August,” said a spokesperson for Namyang Dairy Products.

Food and beverage company Binggrae also announced price hikes for its dairy products the same day starting from the middle of October.

The company’s popular Banana-flavored Milk will retail for 1,500 won, up 7.1 percent.

Other companies have been upping prices recently. Seoul Dairy Cooperative on Friday raised the retail price of its milk products by an average 5.4 percent. Maeil Daries announced it will raise milk product prices by 4 to 5 percent starting Oct. 7.

The rise in milk prices is expected to push up prices of food and beverages that use dairy, such as cheese, butter, bread and ice cream.

Variety does the trick