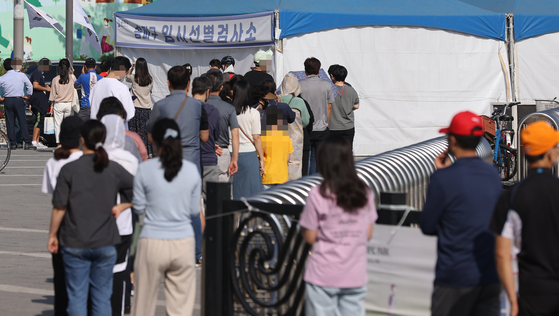 People wait to get tested for Covid-19 at a temporary screening center installed at Olympic Park in southern Seoul on Friday. [YONHAP]

According to the government on Friday, the strictest Level 4 social distancing measures in the greater Seoul area — which consists of Seoul, Gyeonggi and Incheon — and Level 3 in other parts of the country will be maintained for two additional weeks.

In the previous announcement for the distancing adjustment, the government decided to implement the guidelines for four weeks, but this time it reduced to back to only two weeks, in consideration of National Foundation Day on Oct. 3 and Hangeul Day on Oct. 9, as well as the aftermath of the Chuseok holidays.

All restaurants, cafes, noraebang (singing rooms), theaters, gyms, PC bang (PC rooms) and hagwon (cram schools) in the Level 4 areas will again be allowed to operate until 10 p.m. the same as in areas under Level 3.

In Level 3 areas, private gatherings of up to eight people will be allowed throughout the day, with groups allowed no more than four unvaccinated people.

In addition, the country added new vaccine incentives for people who have been fully vaccinated for at least two weeks, which will go into effect from next Monday.

Restrictions on wedding venues, which have been a target of criticism as many couples have had to hold their ceremonies as scheduled with empty seats, have been slightly lifted to allow up to 99 people from 49, if it includes 50 fully vaccinated people — in other words, only 49 unvaccinated guests are allowed, and any more have to be fully vaccinated.

If no meals are provided, up to 199 people will be allowed from 99, with no more than 99 unvaccinated guests allowed.

The government clarified its road map on shifting into its strategy of living with Covid-19, or the so-called “phased recovery to normal life” in November.

Seventy percent of Korea's population are expected to complete their vaccination by the end of October and develop immunity two weeks later, in early November. As of Thursday midnight, 50.1 percent of the total population have been fully vaccinated, while 76.6 percent have received one Covid-19 vaccine dose.

“Today's announcement for the next two weeks is aimed toward helping stably manage the current virus situation, secure hospital beds and home treatment ahead of the phased recovery to normal life in November,” said Lee Ki-il, first control officer for the Central Disaster and Safety Countermeasure Headquarters, during Friday’s briefing. “We believe small business owners and self-employed people may be very disappointed.”

Saying that the next two weeks will be the most crucial moment for transitioning into the plan, the government once again urged people to comply with quarantine measures and get vaccinated.

"If we prevent the spread of infection by unvaccinated people and treat critically ill patients well, together with raising the vaccination rate, we will be able to overhaul into a phased recovery to normal life in November,” Lee said.

On Friday, Korea reported 2,486 new Covid-19 cases, including 2,451 local infections, bringing the total caseload to 313,773, according to the Korea Disease Control and Prevention Agency (KDCA).

Sixteen more deaths were added, raising the death toll to 2,497.