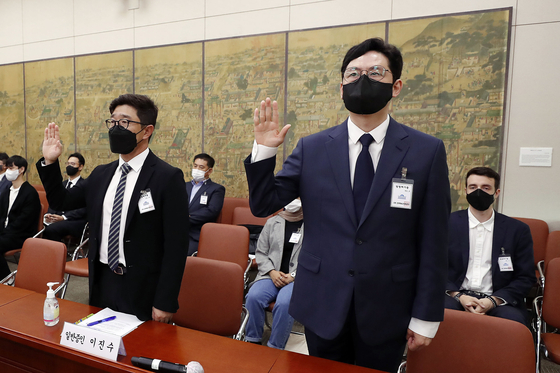 
The head of Kakao Entertainment was grilled at the National Assembly Friday for forcing unfair contracts on webtoon artists.


He offered a groveling apology.

"I realize that we have only been looking at how much we have grown over the years and may have been arrogant during that process," said Lee Jin-soo, CEO of Kakao Entertainment.

The Kakao group is being challenged by the government on a range of fronts, including how it operates its mobility and payment services. Now subsidiary Kakao Entertainment is being bashed for allegedly abusing its content creators.

Kakao Entertainment's Lee was summoned to the National Assembly Friday along with Kim Jun-koo, CEO of Naver Webtoon.

The Culture, Sports and Tourism Committee of the National Assembly was responding to allegations that the two companies were forcing authors to sign contracts that were unfair on both commission rates and copyright issues.

The parliamentary inquiry came after an association of webtoonists issued a statement blaming Kakao Entertainment for gouging authors and demanding copyrights to secondary works.

The association demanded Kakao lowers its commission rate, which is higher than other web content platforms, and stop infringing on authors’ copyrights when it comes to creating works like films based on webtoons or web novels.

“Kakao [Entertainment] charges publishers and authors an extra 20 percent of the cost incurred during the distribution process on the pretense that they will carry out ‘additional’ marketing strategies,” said the Korean Publishers Association in an official statement on Sept. 14.

“They even force authors to provide their works for free, which is virtually impossible for authors to say no to. If they do not do so, they risk being underexposed or getting fewer views than people who do.”

Webtoons and web novels usually charge readers a small fee of 100 to 300 won per episode. Providing them for free means authors have to give up a certain amount of income.

The customary commission rate is 30 percent of revenue to the web content platforms and the rest to the publisher and author. Depending on the details of the contract, that percentage can go higher, but seldom lower.

Marketing strategies refer to promotional advertisements for web content within, and sometimes even outside of, the online web content platform.

For instance, if a reader turns on an app and sees a pop-up ad for a new webtoon, the webtoonist would have paid extra to the platform for the ad. If the company decides to put up posters on the streets, that also means extra cost to the authors, usually in a higher commission paid.

“In a way, we’re taking a risk by making an investment before a work comes out,” the official said. “That process takes place through a mutual understanding with the authors. We also pay back the profit we’ve generated from the promotions to the authors.”


Another factor that adds to shrinking incomes for authors is that they have to sign with a platform through middlemen called Content Providers (CPs), which act as talent agencies. Authors sign with a CP, which signs contracts with a platform on their behalf. The author must share their incomes with CPs after the commission from the platform has been taken away.

“Kakao almost never signs with individual authors, unless they are so popular and powerful that they have the luxury to choose other platforms,” said web novelist Jang Woo-soon, who goes by the penname Jinmun.

“But CPs also take away different proportions as commissions according to the different authors they sign with. The problem is that none of the details are shared openly.”

Jinmun explained that while authors complain about Kakao’s policies, they usually don’t have a choice because Kakao Entertainment’s platform Kakao Page is the biggest player in the market.

According to the Korea Creative Content Agency (Kocca), Kakao Page had the biggest number of users in terms of web novels, followed by Naver and Moonpia. For webtoons, Naver was the leader and Kakao came in second.

Kakao Entertainment and Naver maintain that CPs are a necessary part of the ecosystem because platform services can’t manage the increasing number of creators on their own.

“CPs have been a major player, along with publishers, in nurturing and supporting talent and are a natural part of the ecosystem,” Naver said.

“People aren’t aware of the existence of CPs until they jump into the industry,” said culture critic Kim Heon-shik. “Details of how each platform or agency signs with its authors may vary. If the deals are made transparently and people know what the terms are for other people, then that would help the industry run more smoothly.”

The growing demand for webtoons and web novels as a source of inspiration for dramas and films is causing problems for Kakao, as well as Naver, in copyright issues.

The publishers’ association’s statement also pointed out that the two companies are infringing creators’ rights when it comes to remaking web content.

“Kakao and Naver have been forcing authors and publishers to give up the copyright to derivative works to the platform,” the statement said. “Moreover, the two companies also demand that if a popular web novel is going to be turned into a webtoon series, the work be taken down from other platforms.”

Derivative works refer to alterations of an original work, such as drama or film versions of a popular webtoon or web novel series. According to the Copyright Act, authors hold the right to the derivative works.

According to the association, Kakao Entertainment and Naver Webtoon — the two biggest platforms in the webtoon and web novel market — have infringed authors’ copyrights by claiming the copyrights of and the right to create derivative works.

However, the two companies say that such practices did not take place.

While Kakao explained that it did not demand the rights to derivative works but only “asks the authors the right to sign contracts to create derivative works,” Naver said that taking down a work from different platforms is “entirely up to the author and never forced.” 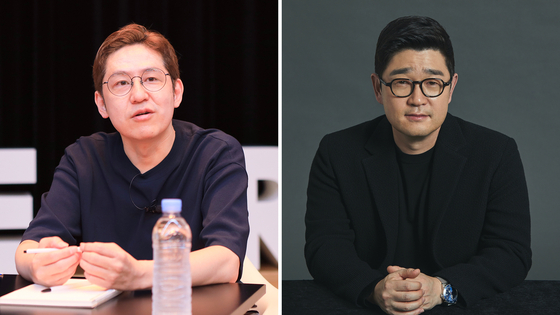 
The feud may act as a potential obstacle for both Kakao Entertainment and Naver Webtoon, which have been trying to crack overseas markets with their web content businesses.

The web content market is growing at a rapid pace in Korea and also considered the key to Kakao’s success in the global market, especially as webtoons and web novels are used as the source of dramas and films.

In fact, Kakao Entertainment recently changed the name of its Daum Webtoon service to Kakao Webtoon and changed the design and functions of the app. The app was launched in June in Thailand and became the No. 1 grossing webtoon in August. Kakao Entertainment said that it is planning to expand the services of Kakao Webtoon to the North American and European regions in the coming days.

During Friday's parliamentary audit, Naver Webtoon's Kim said that while he understands the difficult situation the web authors are in, Naver "is not directly related to the unfair contract or system" but will endeavor to come up with ways to take better care of the authors.

Kakao Entertainment's Lee explained the "misunderstandings" that authors have about the platform and said it is willing to sit down with the authors and government officials to "overcome" the current situation.

The issues with commissions and copyrights need to be fully addressed, but can be seen as growing pains of a burgeoning market, say experts.

“There are bound to be hiccups on the way,” said Jang Min-gi, a professor in the department of media communications at Kyungnam University. “What’s important is that people look at what each entity’s role is in the market and make sure that they’re doing what they’re supposed to.”