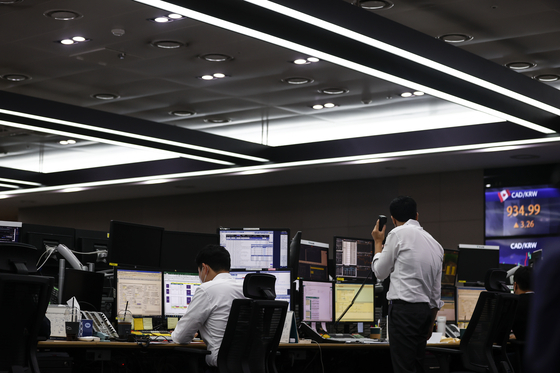 A dealing room at Hana Bank in central Seoul [YONHAP]


The Kospi fell on-quarter in the third quarter for the first time since the first quarter of 2020 on concerns of monetary tightening at home and abroad.

In the fourth quarter last year, the index jumped 23.43 percent, largely thanks to abundant liquidity under monetary easing by governments around the world to tackle the economic downturn caused by the pandemic. Investment also saw an upturn in Korea as small retail investors jumped into the stock market looking for a quick profit.

The trend, however, has been reversed recently as central banks mull ways to pull back the abundant liquidity to stabilize prices and curb household debt growth. 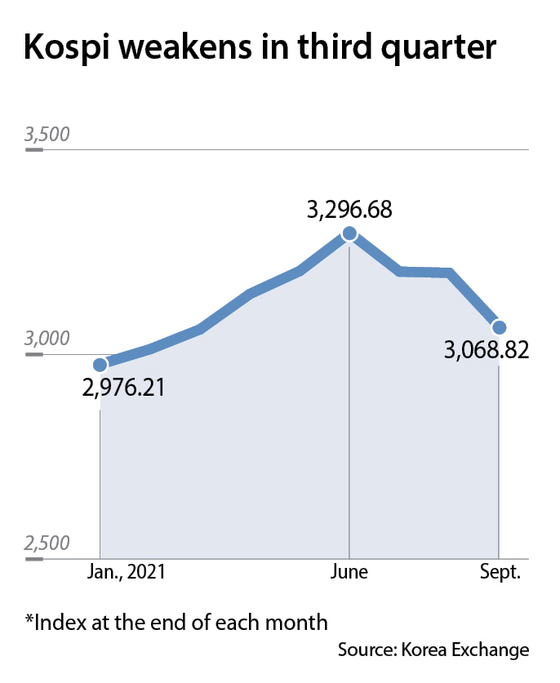 The Bank of Korea has already raised the country’s base interest rate by 25 basis points in August to 0.75 percent and local analysts project another hike is likely to come within the year.

The U.S. Federal Reserve has also signaled a potential tapering of assets in the near future after the September Federal Open Market Committee meeting.

In the past week, Fed Chair Jerome Powell's more hawkish tone in describing inflation has already driven up the yield on 10-year U.S. Treasurys to above 1.5 percent, the highest level since June.

In a testimony delivered to the Senate Banking Committee of the U.S. Congress last week, Powell said “inflation is elevated and will likely remain so in coming months before moderating,” adding that upward pressure on prices could be “larger and longer lasting than anticipated,” particularly due to supply bottlenecks in some sectors.

The comments pulled down both U.S. and Kospi stocks.

Some risks come from China. A possible default by China’s Hengda Real Estate Group, the main unit of Evergrande, froze investor sentiment, while a power supply crunch in the country is hurting global production and causing inflation in major economies.

Kakao and Naver have been scrutinized by lawmakers from last month, mainly related with their fair trade issues.

An issue that might bring up investor interest is third quarter earnings releases by local companies, such as Samsung Electronics, which is expected to release its preliminary earnings this week.

Kim, however, said that strong earnings in the quarter may not translate to strong stock prices considering projections that local companies’ earnings will hit a peak this year and then fall.

Minimize the effect of a rate hike