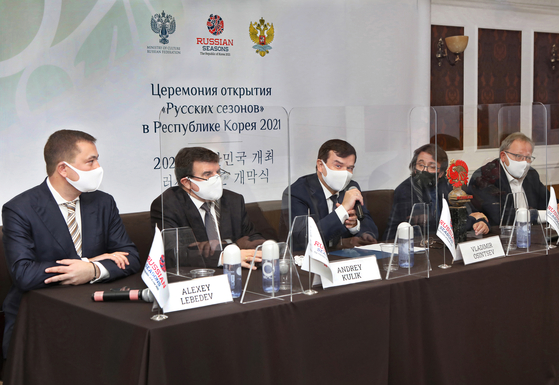 From left, Alexey Lebedev, director of the Russian Seasons Project; Andrey Kulik, ambassador of Russia to Korea; Russia’s Deputy Minister of Culture Vladimir Osintsev; violist and conductor Yuri Bashmet; and Semyon Mikhailovsky, Russian art historian and founder of the Ilya Repin St. Petersburg Academy of Arts speak to the press about the Russian Seasons launching in Seoul on Saturday at the Seoul Arts Center in southern Seoul. [PARK SANG-MOON]

Tolstoy, Shostakovich, Tchaikovsky and their timeless masterpieces will be coming to Korea in the following months as the Russian Seasons, an annual event centered on Russian culture and heritage, launched in Seoul on Saturday.

“The Russian Seasons for Korea has been carefully prepared over the past two years, and will focus on sharing a wide spectrum of culture and heritage of Russia with Koreans,” said Alexey Lebedev, director of the Russian Seasons Project, speaking with the press at Seoul Arts Center.

The Russian Seasons, which was held in Japan in 2017, Italy in 2018, Germany in 2019 and France, Belgium and Luxembourg in 2020, focuses on Russian classical music, ballet and literature.

Yuri Bashmet, the renowned violist and conductor, led the Moscow Soloists Chamber Ensemble to open the Russian Seasons in Seoul on Saturday at the Seoul Arts Center, performing in a packed concert hall, with socially distant seating arrangements, Beethoven’s String Quartet No. 11 in F minor, Op. 95 “Serioso” and Schubert’s String Quartet No. 14 in D minor, D. 810, “Death and the Maiden” among other selected music.

The Moscow Soloists and Bashmet will be performing at the Namhansansung Art Hall in Gwangju on Tuesday, Goyang Aram Nuri in Gyeonggi on Wednesday, the Nowon Foundation for Arts and Culture in Seoul on Thursday and the Daejeon Arts Center on Friday.

“Korean musicians that I have met and performed with have all been high-achievers, with excellent skills,” he told the press at the Seoul Arts Center prior to the opening concert on Saturday. “The pandemic has snuffed out most in-person performances and enjoyment of music. I very much look forward to interacting with the audience in Korea through music.” 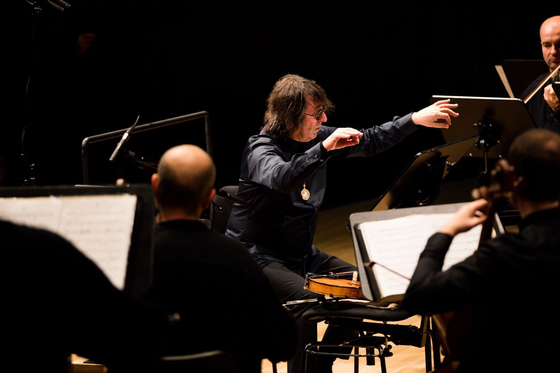 Yuri Bashmet conducting a concert Moscow Soloists during the Russian Seasons in Germany in 2019. [RUSSIAN SEASONS] 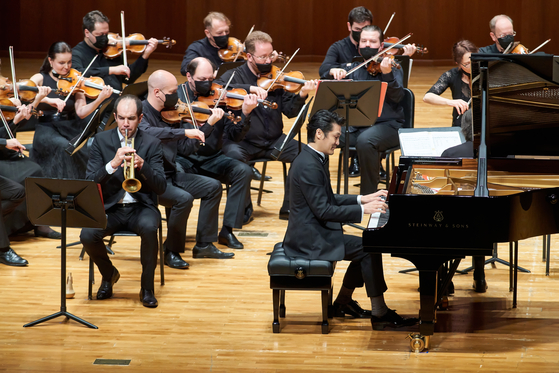 As per tradition, a symbol of the Russian Seasons — a trophy topped with a figure of a phoenix, a mythical creature in Russian fairytales that symbolizes good luck and rebirth — was presented to Korea.

“It symbolizes the spirit of the Russian Seasons, and by presenting it to the host nation of the seasons, we are, in a way, announcing a rebirth to the bilateral ties and relations,” said Osintsev on Saturday.

Russia and Korea established diplomatic ties in 1990, and celebrated their 30th anniversary last year. The two designated 2020 and 2021 as special years for cultural exchanges.

“The seasons is a timely event, given that both Koreans and Russians are eager to find out more about each other’s culture and heritage,” said Andrey Kulik, ambassador of Russia to Korea.

As part of the event, Russian violinist Vadim Repin will perform on Oct. 18 and 19 in Daejeon. 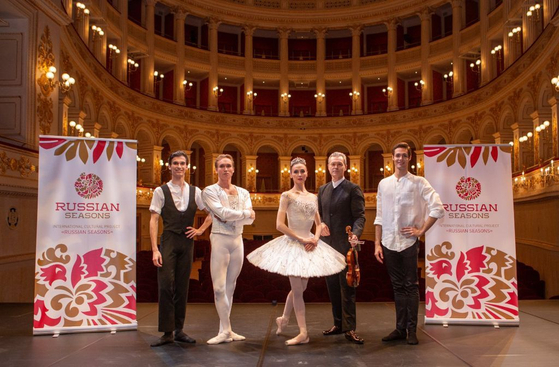 Svetlana Zakharova, soloist of the Bolshoi Theater of Russia, and violinist Vadim Repin during the Russian Seasons in Japan in 2017. [RUSSIAN SEASONS]

From Oct. 19 to 23, students of the Vaganova Academy of Russian Ballet will perform jointly with Korean dancers in Seoul.

In November, a bust of Leo Tolstoy is scheduled to be presented to the Seoul House of Literature by the Ilya Repin St. Petersburg Academy of Arts.

The grand finale to the seasons will be on New Year's Eve, when “The Nutcracker” is scheduled to be performed by dancers of the Vaganova Academy of Russian Ballet to music by Pyotr Tchaikovsky.

“It is significant for us that artists from Russia and the Republic of Korea come together on one stage because that is truly a cross-cultural dialogue, which proves that art is a universal language,” said Lebedev.