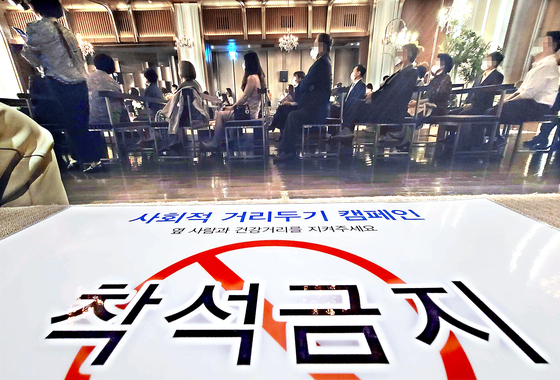 Eased restrictions for weddings were part of the changes for social distancing guidelines announced by the government for the next two weeks through Oct. 17. The photo shows a wedding in Seoul on Sunday and a sign that reads, "Do not sit here" to enforce social distancing. [YONHAP]


The current Level 4 social distancing measures in the greater Seoul area and the Level 3 measures in the rest of the country will remain in place for the next two weeks starting Monday, though additional perks will be offered for those who are vaccinated.


“We are still witnessing a continued trend of high rates of infections following the Chuseok holidays, even as we prepare for two more sets of long weekends,” said Prime Minister Kim Boo-kyum, in a press briefing on Friday. “The current distancing measures will be in place for two more weeks [through Oct. 17], including restrictions on the size of personal gatherings.”

Slight changes were made, however, to larger public gatherings such as weddings or the birthday parties for babies turning one, a traditionally festive occasion in Korean culture.

Restrictions on wedding venues, which have been a target of criticism as many couples have had to hold their ceremonies with empty seats, have been slightly lifted to allow up to 99 people from 49, but only if 50 of the guests are fully vaccinated. In other words, only 49 unvaccinated guests are allowed.

If no meal is provided, up to 199 people will be allowed from 99, with no more than 99 unvaccinated guests allowed.

This change applies to all regions in Korea.

Birthday parties for babies turning one can have 16 guests in Level 3 areas but only four guests before 6 p.m. and two after 6 p.m. in Level 4 areas.

However, from Monday up to 49 people will be allowed in most regions, once the majority is fully vaccinated.

Exceptions will also be made for vaccinated people who want to play outdoor sports. Private gatherings for the purpose of playing outdoor sports, like baseball or basketball, were limited with the same restrictions as private gatherings, but starting Monday, they will be allowed to add as many as 1.5 times the minimum number of players needed to play the games, but only if the additional players are all fully vaccinated.

All restaurants, cafes, noraebang (singing rooms), theaters, gyms, PC bang (PC rooms) and hagwon (cram schools) in Level 4 areas will again be allowed to operate until 10 p.m. the same as in areas under Level 3.

Korea added 2,086 new cases on Saturday, of which 58 were imported, according to the Korea Disease Control and Prevention Center (KDCA). Most of the cases are still focused in the greater Seoul area, with 732 in Seoul, 671 in Gyeonggi and 126 in Incheon. Outbreaks following Chuseok travel spiked cases in cities and counties outside of the greater Seoul area — North Gyeongsang added 96 cases, South Gyeongsang 64 and Daegu 55 cases on Saturday.

The new additions brought Korea’s total caseload to 318,105 as of Saturday, with 36,751 being treated in hospitals and related facilities. A total of 346 were in critical conditions, with nearly half of intensive care unit beds occupied as of Saturday. This leaves 518 beds still open for use. 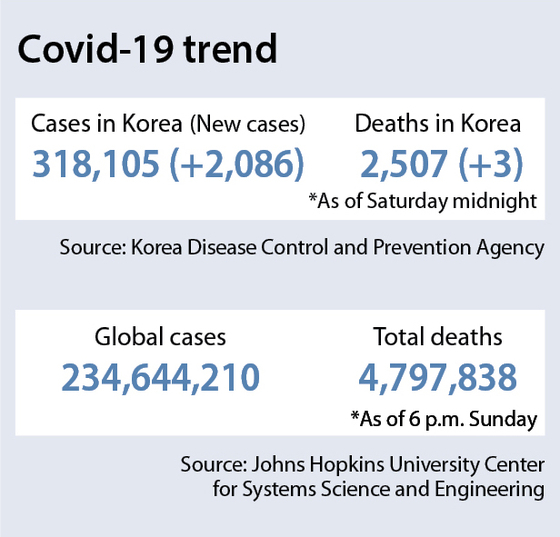 Korea operates quarantine facilities for patients with milder symptoms, and about 58.7 percent of the beds at these facilities were in use throughout the country as of Saturday, according to the Health Ministry. This leaves 8,115 beds still available for use.

Among growing local clusters was a group of soldiers at an Army base in Yeoncheon, Gyeonggi. A total of 46 soldiers tested positive as of Saturday, of whom 41 had been fully vaccinated with Pfizer, according to the health authorities.

The PCR tests for the rest of the soldiers at the base were negative on Saturday.

As of Saturday, 77.3 percent of the population had been administered the first shot of a vaccine while 52.5 percent were fully vaccinated, according to the KDCA.

Three people died from Friday to Saturday, bringing the death toll to 2,507, with 0.79 percent death rate.