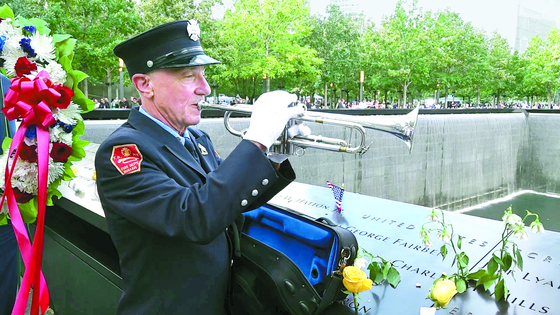 IM JONG-JU
The author is the Washington bureau chief of the JoongAng Ilbo.


At the southern tip of Manhattan, a waterfall falls 9 meters. The stream of water scatters and then gets sucked into the abyss. The unfilled infinite space turns the bustling Wall Street into stillness and silence. This is the pool commemorating the victims of the 9/11 attacks, with nearly 2,000 names engraved on the bronze railing.

I ran into Julius Pontecorvo, a 60-year-old firefighter, at the pool. The official bugler of the New York Fire Department, Pontecorvo played the trumpet at the 20th 9/11 commemoration. He cherished the souls of his colleagues killed in the attacks each year. He barely survived the tragic event and has never forgotten the heroes who perished while saving others. He recalled that it was the time when the U.S. had united as one.

President Joe Biden attended the memorial service at Ground Zero with his predecessors Barack Obama and Bill Clinton. In a video message, he stressed that the most important lesson of the 9/11 attacks — and the greatest power of America — was unity. Having experienced the tragedy during his tenure, former President George W. Bush visited Shanksville, PA, another site of the attacks, reminding people of the history of America’s unity and urging them to stop the politics of anger.

Former President Donald Trump was not at a memorial. Instead, he went to New York police and fire stations and harshly criticized the Biden administration. The crowd cheered. A firefighter was spotted wearing a “Make America Great Again” hat, violating a ban on political slogans.

A week later, wire fences surrounded the Capitol in Washington DC again. Entryways were closed, and the National Guard was on emergency standby. Eight months after the Capitol riot in January, far-right conservatives gathered to protest. They claimed that most of the protesters were innocent. The rally ended peacefully, but the wound runs deep.

In polls by major media companies, only 11 percent said that America is united. According to an AP poll, 88 percent said the country is seriously divided. It is clearly different from 20 years ago, when 72 percent responded positively.

Calls for unity are loud and desperate. It is the irony of an American society divided over ideology and racial discrimination. The memorial trumpet of the old firefighter remembering the time of unity is a sharp reminder.