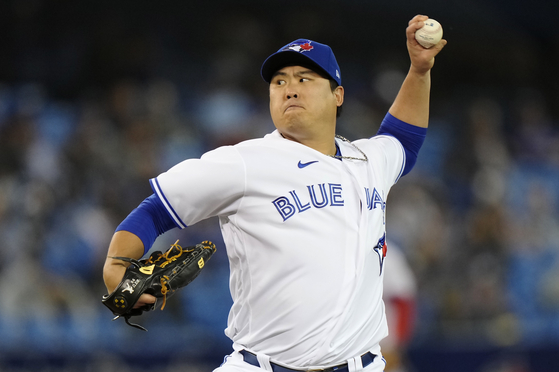 
The Toronto Blue Jays hired Ryu Hyun-jin as a big game ballplayer, and games don't come much bigger than this: On Sunday, Ryu is set to start for the Blue Jays in the final game of the 2021 regular season with a last-gasp shot at a Wildcard spot still on the table.

The Blue Jays enter the final game of the season locked in a four-way race for the American League Wildcard game.

As of Saturday, the New York Yankees and the Boston Red Sox are set to take the two Wildcard spots, both with a 91-70 line and one game left to play. The Blue Jays and the Seattle Mariners trail at 90-71, just one game behind, meaning that a loss for either the Yankees, Red Sox or both and a win for either the Blue Jays, Mariners or both would trigger a Wildcard tiebreaker.

Whatever happens, both the Yankees and Red Sox will either advance to the Wildcard series or a tiebreaker.

The Red Sox are already two games up on the Washington Nationals — 4-2, 5-3 — and could add on more on Sunday. A win for the Red Sox would send them straight to the Wildcard and out of tiebreaker contention.

The Yankees face a much harder challenge, taking on the league-winning Tampa Bay Rays in the final game of a three-game series with a sweep for the Rays on the cards. A 4-3 loss on Friday and a 12-2 hammering on Saturday has the Yankees on the back foot, with a loss on Sunday opening the door for the Blue Jays and Mariners.

The Blue Jays are two up on the Baltimore Orioles — 6-4, 10-1 — and just need to add one more on Sunday to be in with a shot at a tiebreaker. Ryu enters the game off the back of a loss to the Yankees last week and has been struggling on the mound recently, going 2-4 with an 8.10 ERA in the eight starts prior to last week's game. His season ERA now stands at 4.39, the highest of his career for a full season pitched.

If Ryu can pull through on Sunday — and the former Cy Young contender has proven clutch in key moments in the past — he could blow away that difficult patch in one good outing.

The Mariners are tied 1-1 in their series against the Los Angeles Angels, and need to build on the momentum from Saturday's 6-4 win to be in with a chance at a Wildcard tiebreaker.

The league has rules in place for a two-way, three-way or four-way Wildcard tiebreaker, with the teams with the best combined head-to-head records gaining the home-field advantage in each scenario. The Wildcard is scheduled to be played on Oct. 5, or Oct. 6 in Korea, although if multiple tiebreakers are required it may have to be delayed.

The Toronto Blue Jays will take on the Baltimore Orioles on Sunday, or at 4 a.m. on Monday morning in Korea.