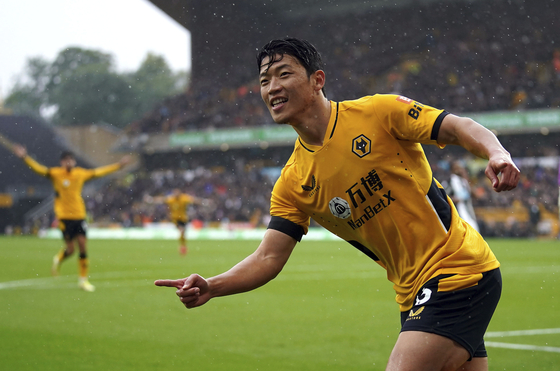 Hwang Hee-chan celebrates after scoring the opening goal for Wolverhampton Wanderers against Newcastle United at Molineux stadium in Wolverhampton, England on Saturday. [AP/YONHAP]


If there was ever any question that Hwang Hee-chan has what it takes to play in the Premier League, the Korean import answered it on Saturday, scoring both goals in Wolverhampton Wanderers 2-1 win over Newcastle at Molineux Stadium in Wolverhampton, England.

The Korean striker was on fantastic form, scoring both goals with clinical precision. His 20th minute gave Wolves a 1-0 lead, which he then reclaimed in the 58th minute to take the score to 2-1. Newcastle's Jeff Hendrick scored in between Hwang's goals, but the brace ensured that Wolves walked away with their first home win of the season. 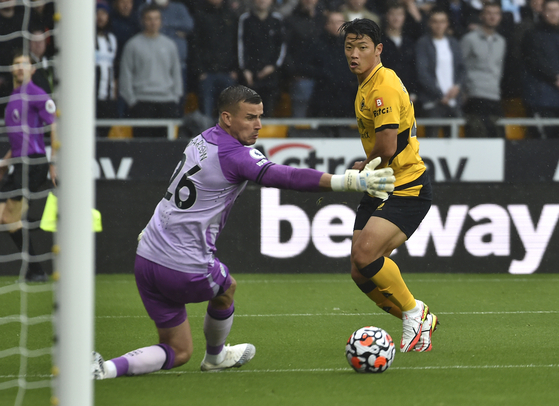 
Both of Hwang's goals were supplied by Raúl Jiménez, signaling the arrival of a potentially potent new attacking partnership that has already started to turn things around for the midlands club.

Hwang joined Wolves on loan from RB Leipzig at the end of August. He scored for the club in his debut on Sept. 11, becoming the first Wolverhampton player to find the back of the net this season. Adding to that accolade, Hwang, known as The Bull for his relentlessly aggressive style, has now also led Wolves to their first home win. 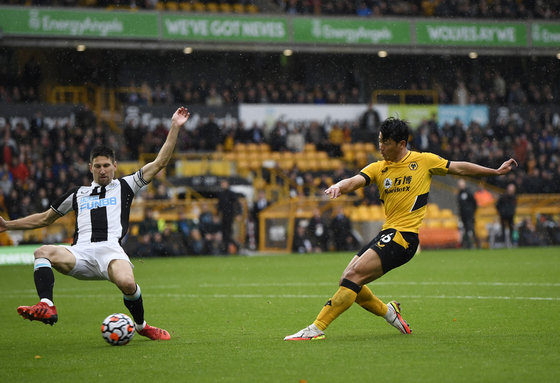 Hwang Hee-chan, right, scores the second goal for for Wolverhampton Wanderers against Newcastle United at Molineux stadium in Wolverhampton, England on Saturday. [REUTERS/YONHAP]


Hwang's contribution in that first game was thanks to a goalmouth scramble that saw him in the right place at the right time, but Saturday's goals told a different story. On both occasions, Hwang received a well-placed pass from Jiménez and then outstripped the defender before executing a well-placed shot to beat the keeper — at one point even nutmegging a defender en route to the goal.

Hwang's efforts earned him a standing ovation as he left the pitch in stoppage time and praise from pundits and fans alike.

“He has adapted to the Premier League, he fits our way of playing because we need a player like him," said Wolves manager Bruno Lage. “I believe the players want to play with the ball. Top players can enjoy our game and he is a top player, like the other guys."


“I knew him before because when I was at Benfica I had some reports on him. But it’s not just about Hwang, what I want is to take the best from all the players."

Hwang will return to Korea this week to join the national team for a pair of World Cup qualifiers, against Syria on Thursday and against Iran on Oct. 12.