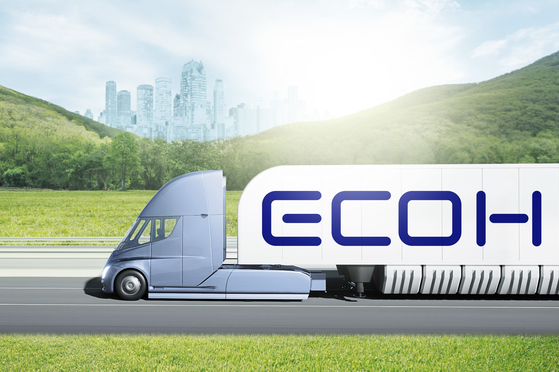 The system will be involved in all areas of the hydrogen business including production, storage and transport, according to Hyundai Glovis, the logistics unit of Hyundai Motor.

Ecoh is supposed to be a combination of the terms eco and human.

Ecoh will transport hydrogen to more than 360 hydrogen charging stations nationwide by 2030 and will increase the number of hydrogen shipping centers to nine by the same year.

Ecoh will also transport green hydrogen in foreign countries including Australia and the Middle East.

Green hydrogen is hydrogen fuel that is created using renewable energy instead of fossil fuel.

For the hydrogen transportation plan, Hyundai Glovis joined Swiss commodity trading company Trafigura in September in a consortium to transport ammonia starting in 2024.

Hydrogen is extracted from ammonia, which is seen as an efficient means to store and transport hydrogen.

Through Ecoh, Hyundai Glovis plans to partner with a global hydrogen company to store and transport liquid hydrogen by 2024.

Hyundai Glovis is in talks with several companies for the partnership.

Ecoh will also collect electric vehicle batteries and reuse them for different purposes.

The company has not yet decided how to reuse the batteries. “A lot of spent batteries are expected after 2028 after average battery lives, which are between seven and 10 years, end,” said Hyundai Glovis in a statement.

Used Battery Energy Storage Systems, which use recycled batteries from electric vehicles, are another business model Hyundai Glovis is considering for Ecoh.

Hyundai Glovis announced in February that it developed a container dedicated to transport different types of spent electric vehicle batteries to minimize damage to the batteries.

Hyundai Glovis “will build a reputation as a comprehensive platform operator of the eco-friendly energy market through the charging and reusing of electric vehicle batteries,” said a company spokesperson.