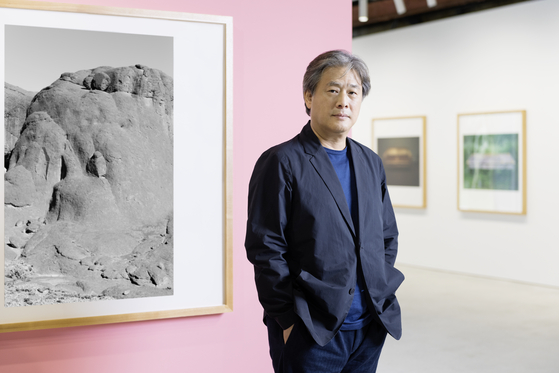 Filmmaker-turned-photographer Park Chan-wook poses for photos prior to the opening of his first solo exhibition ″Your Faces″ in Kukje Gallery, Busan. [KUKJE GALLERY]


BUSAN — Park Chan-wook, one of the filmmakers credited with starting the global renaissance of Korean cinema, is an introvert.

At least, that is how he described himself during the press opening of his first photo exhibition “Your Faces,” hosted at Kukje Gallery, Busan on Friday. The exhibition showcases 30 photos that Park took from 2013 up until recently as he traveled around the world to work on films or promote them.

However, fans of Park looking for some exclusive behind-the-scenes moments might leave feeling disappointed. The main subjects of his photos in this exhibition are ordinary and inanimate objects, animals or landscapes that caught the filmmaker’s eye during his spare time. 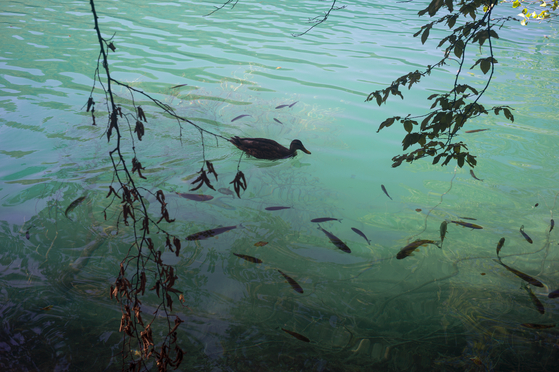 
“I’ve never actually traveled to take photos,” Park revealed. “They [the photos] are places that I had to visit due to my profession. To tell you the truth, I don’t really like traveling. What I like the best is to just stay in my home, but I have to travel to film, to visit film festivals and to promote them. Residing in hotels and moving from one place to another is all very tiring and strenuous for me, which is one of the reasons why I lean toward photographs even more. It’s how I reap something worthwhile from the travels that I do not enjoy. So whenever I visit a city, I specifically ask the people I'm working with to give me one or two spare days so that I can look around. That’s when I take the photos.”

Although he established a name for himself as a renowned filmmaker, his persona as a photographer came first, according to Park. The influence came from the filmmaker’s own father who used to take pictures of his family throughout the director’s childhood. In his college days at Sogang University, Park was also active as a member of a student photography club.

Park said that his reserved and withdrawn personality almost led him to give up on filmmaking.

“To be able to create a film by putting our heads together can be a pleasure, for sure,” Park said. “But when it becomes difficult to synchronize people, it becomes incredibly hard. I’m not a leader so I can't mediate differences of opinion. I am the kind of person who likes to be alone, an introvert, so I’d never imagined that I would become a filmmaker.” 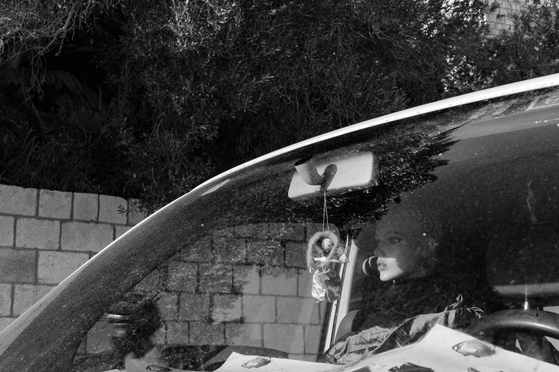 
“What’s more, films cost a lot of money, up to several millions and billions of won, and to spend someone else’s money can be very scary,” Park said. “I don’t sleep well at night [because of this realization]. But compared to films, taking photographs feels like a relatively lightweight and freeing process to me, which is why I don’t give up on it no matter how busy I am. Regardless of the result, I am the one solely responsible for the photos, without causing any damage to others.”

The title of the exhibition, “Your Faces,” refers to the momentary expressions that Park glimpsed through his subjects.

“I hope when a viewer stands in front of a certain photo, they can confront the object in the photograph one-on-one and read its expression, and experience their own feelings and thoughts that pop in their minds when looking at the photos.”

The filmmaker also shared some of his own insights behind his photos. Park captured “Face 16” (2013) during one of his morning walks while staying at a hotel in Morocco. 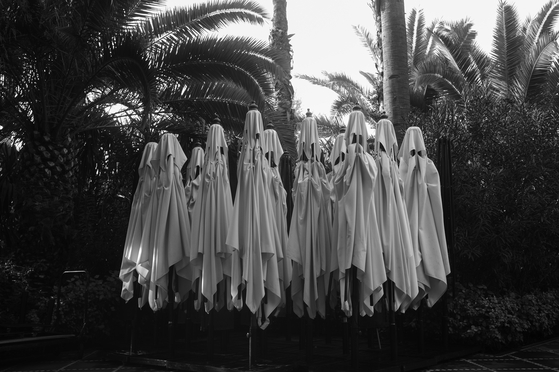 
“I saw a couple of parasols folded and gathered in a corner by the swimming pool,” he said. “To me, they looked like Islamic ghosts. I could perhaps hear their whispers at night.”

In a photo titled “Washington D.C.” (2013), a golden velvet sofa became the subject of Park’s camera. 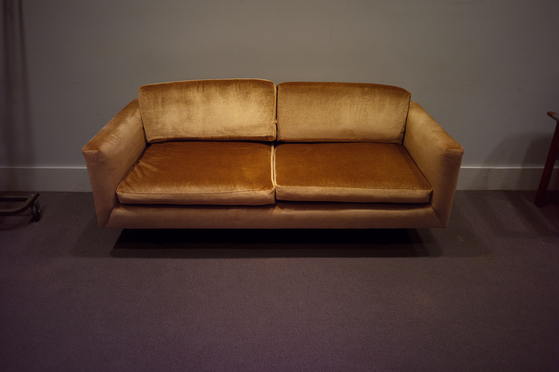 
“The sofa was in the waiting room of a museum in Washington D.C., right before the panel discussion for ‘Thirst’ [2009] started. During the time, I was touring around several cities in the U.S. to promote the film, and we were going around one city per day, so it was an extremely tight schedule. I felt so tired that I just wanted to sink into the sofa, and its velvety texture felt like a welcome to me.”

For some photos, Park focused on capturing fleeting impressions from his surroundings. For others, he tried to show the texture of his subjects, like “Face 45” (2015), which highlights the grainy texture of a mountain in the Sahara Desert. 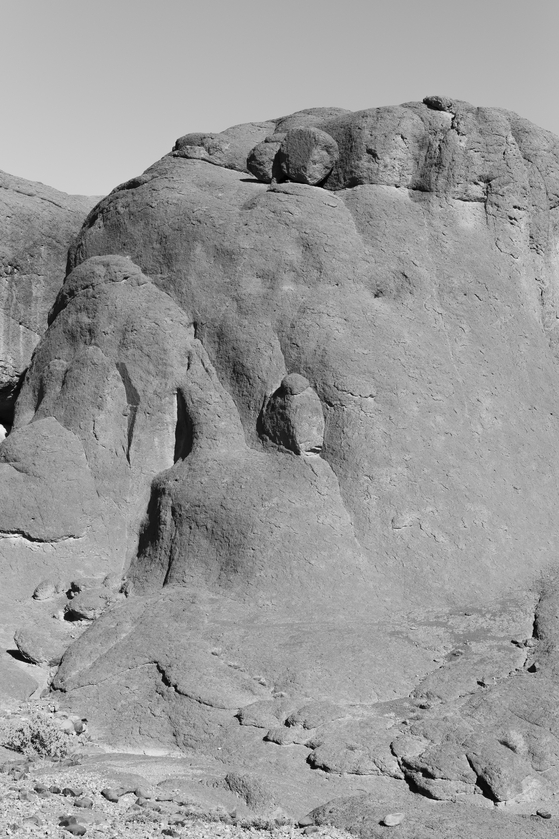 
“[The mountain’s] figure was picturesque, and I thought it would leave a different impression on each person,” Park said. “For instance, some might think that it looks like the head of a person wearing a scarf.

“The texture was important too. I hoped the rough, grainy texture of the rock could be felt by the viewers as if they were touching the surface themselves. It’s the same with films. Whatever props or costumes I use in my films, I ask [the designers] to put care into the fabric and the patterns, so that the audience might be able to actually feel it [through the screens]. When we watch a film, we directly observe it through our eyes and ears, but when everything is materialized properly, what is shown on screens can stimulate other senses too — we can feel the texture through our fingertips or smell as well. I try to make films that can do that. It’s the same for photographs as well.”

Park seems to be drawn to photography for its simplicity and independence, qualities that are parallel to his attractions to filmmaking.

“A photo cannot build up a character or a story with complicated layers, but it can lead to certain emotions depending on the viewers due to its simplicity,” he said. “Whereas a film is carefully constructed and designed with the creator’s intention to ultimately pass on a message to the audience. In contrast to still scenes of a film, a picture has its own independence, a complete universe within its frame, and it’s the kind of medium in which people need to peer closer and think longer about its meanings.”

For an esteemed filmmaker, the director surprised the press by admitting that he hardly takes any videos of his travels, instead preferring to stick to his digital cameras.

“I guess I have high standards when it comes to moving pictures,” he said. “I mean, I work with the very best camera directors around the world when I’m making films, so it’s difficult for me to haphazardly film things with my camcorder. I know that the digital camcorders coming out now have been updated to record videos beautifully, but since my profession is already filmmaking, I really don’t want to think about filming during my free time [...] Even during my daughter’s childhood, I did not film anything. I only took pictures.”

Park has similar reasons for choosing to focus on non-human subjects for his photographs. Although Park published “The Handmaiden Photo Book” in 2016 which contains behind-the-scenes snaps of the film, he prefers to leave people out of his photos when they are not related to his filmmaking.

“I don’t look for people because I create the characters and their emotions in the films,” Park said. “So I don’t want to prolong the experience in my photo works as well. It’s different for non-living objects in the sense that I can sometimes spot vitality in them, catching the expressions within them whether that is happiness, sadness or even impassivity. I have no intention of taking photos of people’s faces, at least not yet. But who knows about the future.”