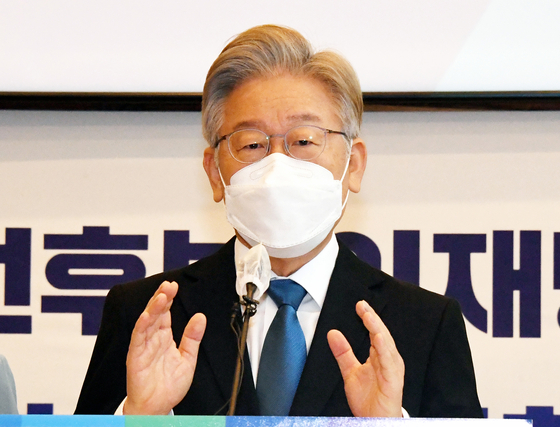 Gyeonggi Gov. Lee Jae-myung, the leading candidate in the ruling Democratic Party's presidential primary, speaks about a land development project in Daejang-dong during a press conference in Myeongdong, central Seoul, on Monday. [NEWS1]


The ruling Democratic Party’s presidential frontrunner, Gyeonggi Governor Lee Jae-myung, directly acknowledged responsibility for a land development project at the center of a growing scandal, and expressed regret for the first time on Monday, following the arrest of Yoo Dong-gyu, a key figure in the scandal, the previous day.

“It is right that I, as mayor at the time, was responsible for the management of Seongnam city officials and employees of affiliated institutions,” Lee said during a press conference in Myeongdong, central Seoul, on Monday.

“I feel very bad that an employee who was under my supervision in the past is involved in something unsavory concerning the affairs I was in charge of,” said Lee, referring to Yoo Dong-gyu. "I checked up [on the people, referring to the city officials and workers under him] again and again, but it was still insufficient.”

The scandal over the development project in Daejang-dong, Seongnam, centers on revelations that an obscure and small private asset management company, Hwacheon Daeyu, and its affiliates reaped profits of more than 1,000 times their investments after it was made a partner in the 2015 project.

The scandal has ensnared politicians from across the political spectrum, with Governor Lee — mayor of Seongnam at the time — facing scrutiny for his role in the project and his relationship with the Hwacheon Daeyu’s owner Kim Man-bae, a former journalist who interviewed him in 2014.

Monday's comments were the first direct acknowledgement by Lee of his supervisory responsibilities for the Daejang-dong project, and his first expression of any regret.

“As a politician, I express my deep regret,” Lee said, “for not being able to fully retrieve the development profits.”

Yoo Dong-gyu, former acting president of the city-owned Seongnam Development Corporation, was arrested Sunday night on charges of breach of trust and bribery under the Special Economic Crimes Act. He is accused of designing a profit distribution scheme that favored certain private companies that invested in the Daejang-dong project, causing the city losses.

Prosecutors also suspect that a clause in the investment contract that would have required private sector investors to return excess profits was deleted under orders from Yoo, resulting in massive profits for private investors and massive losses for the city.

Yoo is accused of receiving 1.1 billion won ($930,138) in return for designing the profit distribution scheme.

Yoo denied the charges during an arrest warrant hearing Sunday.

Suspicions have also been raised that Yoo may be close to Governor Lee, as he served as head of the Gyeonggi Tourism Organization after Lee was elected governor of Gyeonggi Province.

Lee also mentioned the opposition People Power Party (PPP)'s call for him to resign as governor of Gyeonggi Province, saying, “If I resign for a personal deviation of an employee, all heads of organizations in Korea must resign,” and added, “Will the president resign if a Korea Electric Power Corporation (KEPCO) employee is bribed?”