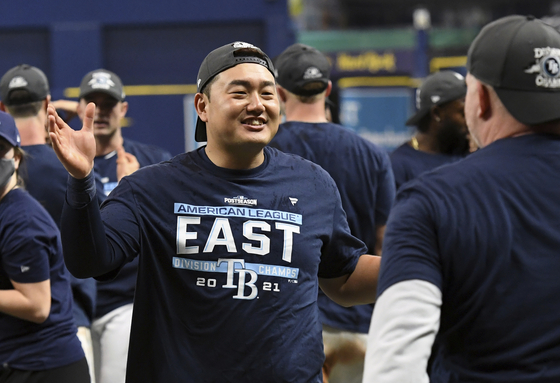 
The 2021 Major League Baseball regular season wrapped up on Sunday with Choi Ji-man of the Tampa Bay Rays and Kim Kwang-hyun of the St. Louis Cardinals the only Korean players set to advance to the postseason.

Choi and the Rays finished the regular season at the top of the American League East with 100 wins and 62 losses, marking the first 100-win season in the club's history. The Rays will now advance straight to the AL Division Series, where they will face either the Boston Red Sox or New York Yankees at Tropicana Field in St. Petersburg, Florida, on Thursday.

Kim and the Cardinals face a tougher path. With a 90-72 season good enough to earn them second place in the National League Central, the Cards advance to the NL Wildcard, where they face the Los Angeles Dodgers on Wednesday. The winner of that game will advance to the NL Division Series to take on the San Francisco Giants, starting Friday.

For the four other Korean players that have plied their trade in the majors this season, it's an early shower, and possibly a difficult conversation about their future.

Ryu Hyun-jin of the Toronto Blue Jays ended his season on a high note with a win on the final day on Sunday, giving up two runs off six hits in five innings pitched in a big 12-4 win over the Baltimore Orioles.

That win would have been enough to earn the Blue Jays a shot at a Wildcard tiebreaker, had either the Red Sox or Yankees dropped their final games on Sunday. With wins all around, the Blue Jays end with a 91-71 line, just one game short of some playoff action.

Kim Ha-seong's San Diego Padres finished third in the National League West with a 79-83 line that left them well out of Wildcard contention. The second-place Dodgers picked up more than 100 wins, leaving the Padres nearly 30 games off a playoff spot.

Things went even worse for Park Hoy-jun's Pittsburgh Pirates and Yang Hyeon-jong's Texas Rangers, both of whom finished last in their respective divisions.

The Rangers crashed out at the bottom of the AL West with 60 wins and 101 losses, putting them in the bottom three across all MLB teams when it comes to winning percentage. Yang finished his season in the minors after a yo-yo season that saw him called up and sent down multiple times.

The Pirates only did slightly better, grounding out at the bottom of the NL Central with 61 wins and 101 losses.

On an individual basis, none of the Korean players had stand-out seasons.

Choi heads into the postseason with a .229 batting average with 59 hits and 11 home runs on the season. Those numbers aren't terrible, but they aren't the big slugging figures that Choi was able to throw up a couple of seasons ago. Injuries have been an issue this year, but the MLB's top Korean slugger will still be looking to come through in the playoffs like he did last season.

Kim Kwang-hyun has a respectable 3.46 ERA on the season, but lost his starting spot in the Cards' rotation. With seven wins and seven losses on the season, there could be some questions over Kim's future with his contract up for renewal this winter.

Ryu's 4.37 ERA is his worst for a full season since joining the majors. Consistency seems to have been the problem more than skill, however, as Ryu also tied his personal best 14 wins for the season.

Kim Ha-seong ends his debut season with a disappointing .202 batting average on the season. With three years of a four-year deal still to go, Kim still has time to work out the issues, but the pressure will be on him to improve significantly over the offseason.

Yang doesn't have the luxury of time. His 12 major league appearances leave him with a 5.60 ERA, three losses and an expired one-year contract. Park is in a similar position, ending his MLB debut season with a .195 batting average after appearing in 45 games following a late call-up.