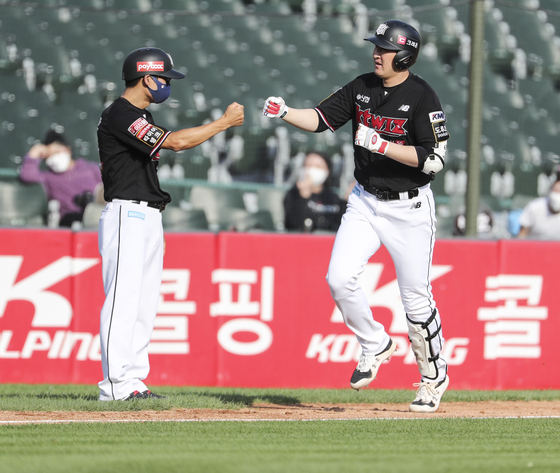 Yoo Han-joon, right, rounds the bases after hitting a three-run home run at the top of the third inning in a game against the Lotte Giants in Busan on Friday. [YONHAP]


With four days left of regularly-scheduled games and three weeks of make-up dates to go, the KT Wiz hold on to a comfortable lead at the top of the KBO with the LG Twins and Samsung Lions both trailing by 3.5 games.

None of the league's 10 teams emerged victorious over the weekend, with four of five series including at least one tie as the KBO continues to play without extra innings to speed up games during the rushed second half of the season.

The first-place Wiz won one and tied one against the SSG Landers, who are tied for sixth after spending the second half of the season gradually slipping down the table. The two tied 2-2 on Saturday before the Wiz broke through for an 8-6 win on Sunday.

The Twins beat the fifth-place Kiwoom Heroes 10-3 on Saturday and tied 3-3 on Sunday, holding on to second place with five more games to play than the Wiz.

The third-place Lions and fourth-place Doosan Bears took a game each, with Doosan winning the first game 6-0 and the Lions taking the second 13-9. The result holds the Bears, who have been making an aggressive last-gasp push for the top three, in fourth place, eight games behind the Wiz.

With 24 games still to play, the Bears are still well within striking distance, but the chance of them sneaking up the table is getting smaller every day.

The reigning champion NC Dinos, currently tied with the Landers in sixth, tied 4-4 with the eighth-place Lotte Giants on Saturday before losing 11-7 on Sunday. The Dinos are in the middle of a slump that has derailed their postseason chances with time running out. With just three wins in their last 10 games, the Changwon club will have to work hard if they want to get back into contention.

The final game of the weekend saw the ninth-place Kia Tigers take on the 10th-place Hanwha Eagles. The Tigers won the Sunday game 9-6 after a 4-4 tie on Saturday, but both teams still trail by more than 20 games.

Two series remain before the league reaches its scheduled end on Thursday, but there will then be three weeks of makeup games due to the normal rain and fine dust cancellations compounded by the edition of Covid-19 interruptions this year.

Starting Tuesday, the Landers will take on the Twins, the Lions will play the Heroes, the Dinos face the Wiz, the Bears take on the Eagles and the Tigers visit the Giants in Busan.