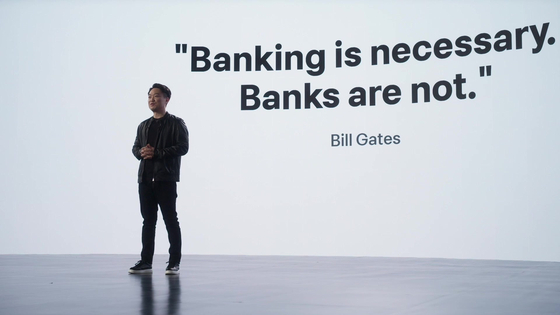 "We designed our products to free customers of the burden of deciding which product to choose," said Hong Min-taek, CEO of Toss Bank, during an online press briefing held Tuesday.


According to Hong, customers are being offered only one kind of deposit, one kind of loan and one kind of debit card. Customers won't have to bother comparing different products to find the best deal.

For instance the bank's sole deposit option offers 2 percent interest rate annually, higher than most other banks. Customers don't have to meet any conditions to earn interest, such as a minimum deposit or length of time keeping the money in the bank.

Asked whether such a high deposit rate can be maintained, Hong said, "The rate is higher than other banks" but it is still "manageable." He said the bank considered both the bank's profitability and government regulations when setting the 2 percent deposit rate.


For loans, customers will be offered one loan program at rates and conditions that best fit their credit scores, rather than a list to choose from. If there are updates to the offering, for instance if a loan ceiling has been upped due to an improvement in the customer's credit rating, the bank said it will notify the customer immediately.

Unsecured loans will be offered at interest rates ranging from 2.76 percent to 15 percent annually. The ceiling for loans for all customers is set at 270 million won ($227,500).

A customized loan application program is based on the bank's own credit evaluation, dubbed the Toss Scoring System. According to the bank, its system enables customers with bad or no credit histories to be offered the best loan option.

Toss Bank said in a statement that about 30 percent of people who would have been denied loans from first-tier financial institutions in the past would qualify under the Toss Scoring System.

The bank also offers overdrafts with a limit of 150 million won.

It said it is preparing to offer services to foreigners residing in Korea.

"Foreigners living in Korea have had difficulty using non-face-to-face banking services," Hong said. "We have found a way to legally confirm the identity of foreign users via their certification of alien registration. The service will take some more time but we plan to open services for [foreign users] soon so that no customers are left out."

The bank started accepting registrations last month and over a million customers have signed up.