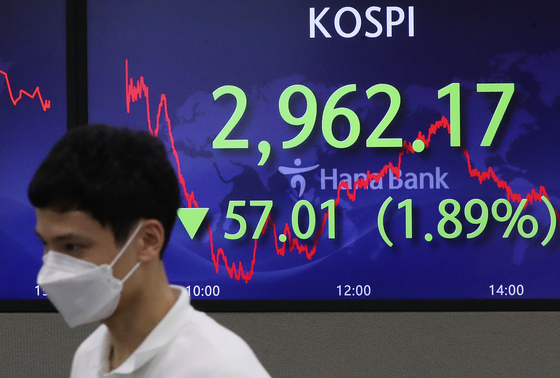 
Stocks plunged to an almost seven-month low Tuesday, as investor sentiment was weakened by the debt ceiling tussle in the United States and debt crises involving Chinese property developers. The won closed unchanged against the dollar.

Local stocks got off to a weak start, falling below the 3,000-point threshold for the first time in about six months. The Korean stock market was closed Monday due to an extended holiday tied to the Oct. 3 National Foundation Day.

An impasse over the U.S. debt ceiling raised concerns that the U.S. faces risks of a default and it may deal a blow to President Joe Biden's big spending plan. Energy prices stayed high, adding to the worries of a slowdown in global economic recovery.

"Issues like the U.S. debt ceiling and the China Evergrande crisis, in addition to inflation concerns from supply bottlenecks, are expected to linger for a while, generating uncertainties in the stock markets," Eugene Investment & Securities analyst Huh Jae-hwan said.

The local currency closed at 1,188.7 won against the dollar, unchanged from the previous session's close.