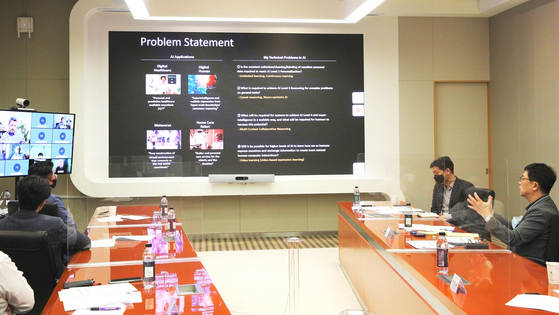 
LG Electronics hosted talks on advanced artificial intelligence technologies such as neuro-symbolic AI and hyper-scale AI during the latest meeting of its new discussion body dubbed the Innovation Council.

The company said Tuesday that the meeting took place last Friday online and was attended by prominent AI scholars.

Neuro-symbolic AI refers to a hybrid approach in training AI systems that combines the concept of neural network architectures with symbolic reasoning, a more traditional technique.


Hyper-scale AI refers to an AI model with more parameters and a better capacity to efficiently process data.

“LG Electronics discussed the latest developments in neuro-symbolic and hyper-scale AI with an aim of developing AI services tailored for humans’ needs,” the company said in a statement.

David Cox, the director at MIT-IBM Watson AI Lab and one of the council’s members, delivered a speech at the virtual meeting, alongside Rodney Brooks, CTO from Robust AI, and Kim Jung-sang, electrical and computing engineering professor at Duke University.

Also attending were representatives from LG’s other affiliates including LG Chem, LG U+ and LG CNS.

The company recently added digital healthcare, cybersecurity and next-generation computing technologies to the list of subjects to be covered by the council.

The council, which was launched last July, has touched upon other tech trends like the metaverse and robotics.

Despite the wide variety of interests cited, AI has been at the center of LG’s research and investment focus.

LG AI Research, for instance, announced in May that it will invest more than $100 million over a three-year period to establish computing infrastructure to help the organization’s research in artificial intelligence (AI) technology.

By the end of that three-year period, LG hopes its computing infrastructure will reach the capacity to process 9.7 quintillion calculations per second.