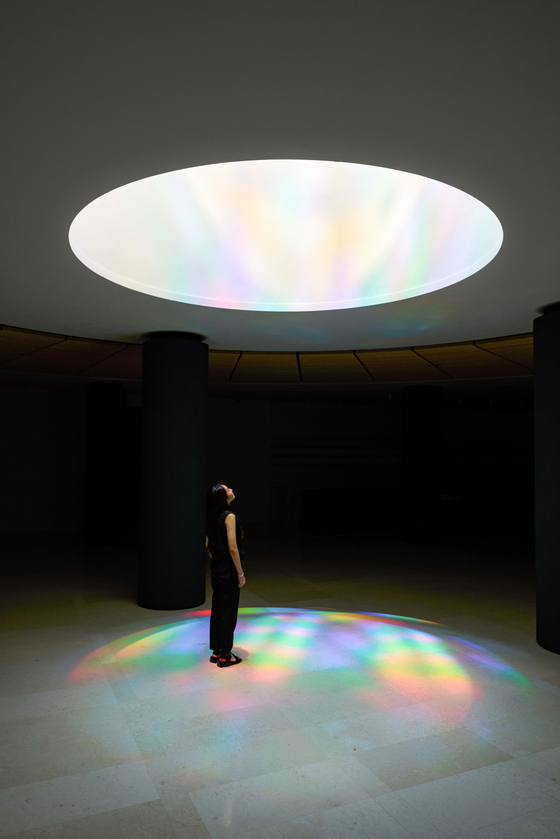 Korean artist Kimsooja's ″To Breathe, 2021″ is installed on the ceiling of the rotunda of the renovated Leeum Museum of Art, which will reopen on Friday. [KIMSOOJA STUDIO] 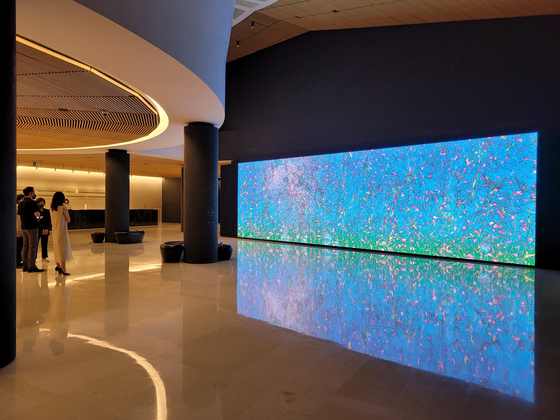 
Leeum Museum of Art, one of Korea’s top art museums which has been virtually dormant since 2017, will reopen its doors to the public this Friday.

Once reopened, the museum located in Hannam-dong of Yongsan District, central Seoul, will no longer charge admission for its permanent collection exhibitions, which encompass old Korean art including National Treasures and works by world-famous contemporary artists.

The complimentary admission is a move to “honor the meaning behind the donation of the late [Samsung Electronics] Chairman Lee Kun-hee’s collection to the nation,” according to Leeum. The Leeum collection was set up in 2004, combining part of the vast art collection of the late Chairman Lee (1942-2020) and that of his father and Samsung founder Lee Byung-chul (1910-1987), which had been donated to the Samsung Foundation of Culture.

The special exhibition to celebrate the reopening, “Human, 7 questions,” will similarly not charge admission until the end of this year.

Last April, the family of the late Lee donated more than 23,000 pieces of his art collection, including National Treasures and works by renowned artists such as Claude Monet, Salvador Dali and Kim Whanki, to national museums. The Leeum collection is owned by the Samsung Foundation.

The Lee family's donation triggered an explosion of the public’s interest in the Lee family’s art patronage. Currently, all time slots for the ongoing special show of the donated Lee collection at the National Museum of Modern and Contemporary Art (MMCA) in Seoul, which kicked off in July, are booked through late October.

Accordingly, it is no surprise that the reopening of Leeum has become the talk of the town. Amid the renewed public interest, the museum, in a press preview on Tuesday, unveiled new permanent collection exhibitions and the large-scale special show “Human, 7 questions,” along with the newly renovated interior by Seoul-based Notion Architecture and a new logo designed by the London-based company Wolff Olins under the direction of the famous fashion and stage designer Jung Kuho. 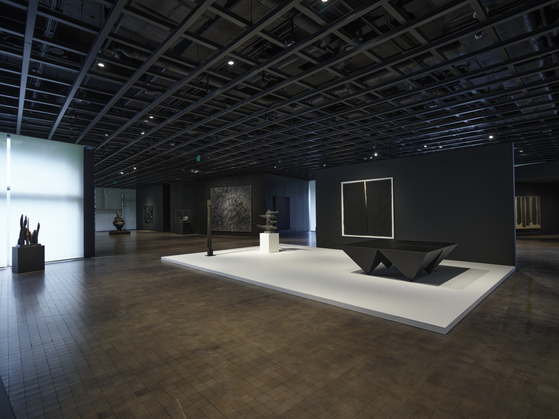 The view of the ″Black Blank″ exhibition at a permanent collection gallery of Leeum, which will reopen on Friday. [LEEUM MUSEUM OF ART]


The new interior doesn’t look dramatically different, but it does have a more streamlined appearance. The renovated lobby has a new, 11.3-meter (37-foot)-wide, 50-million-pixel display, which now shows Jennifer Steinkamp's colorful media art pieces. The ceiling and wall windows of the rotunda, the museum’s iconic space designed by architect Mario Botta, are now wrapped with translucent diffraction film sheets so that sunlight coming through them make planes of iridescent light on the walls and floors — a work by artist Kimsooja in her “To Breathe” series.

The permanent collection galleries around the rotunda for old Korean art showcase a total of 160 works. Among them are famous National Treasures such as “Gilt Bronze Miniature Pagoda” from the 13th century; “Amitabha Triad,” a Buddhist painting from the Goryeo Dynasty (918-1392); and “Taoist Immortals,” a large-scale 18th-century painting by Kim Hong-do, one of the greatest masters of the Joseon Dynasty (1392-1910). Some of the exhibits are juxtaposed with contemporary artworks such as blue and white porcelain pieces from the Joseon Dynasty with dansaekhwa (Korean monochrome painting) master Chung Sang-hwa’s painting and Goryeo Dynasty Buddhist paintings with Anish Kapoor’s sculpture “Shrine.” 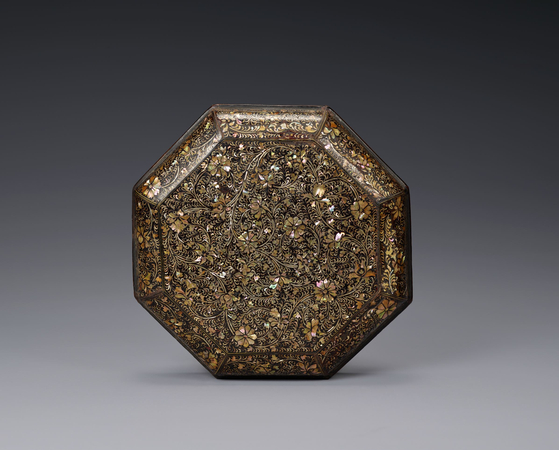 Among the new exhibits in the permanent collection galleries for old Korean art is ″Box Inlaid with Mother-of-pearl″ from the 14th or 15th century. The box shows well the characteristics of the lacquerware inlaid with mother-of-pearl from the Goryeo Dynasty (918-1392), which is celebrated for its exquisite beauty. The box is the only remaining octagonal container of its kind. [LEEUM MUSEUM OF ART]


In addition, there are several artifacts to be exhibited for the first time. The highlight of these new items is "Box Inlaid with Mother-of-pearl" from the 14th or 15th century. The box is a paragon of Goryeo lacquerware inlaid with mother-of-pearl, celebrated for its exquisite beauty. Furthermore, it is the only remaining octagonal container among the rare Goryeo lacquerware pieces.

The permanent collection galleries for modern and contemporary art in a space designed by architect Jean Nouvel present 76 works in three themed exhibitions.

Works in the “Black Blank” show, which examines aesthetics and symbolism of the color black, range from black-and-white photos by Koo Bohnchang and Hiroshi Sugimoto to black sculptures by Paul McCarthy and Tom Wesselmann. 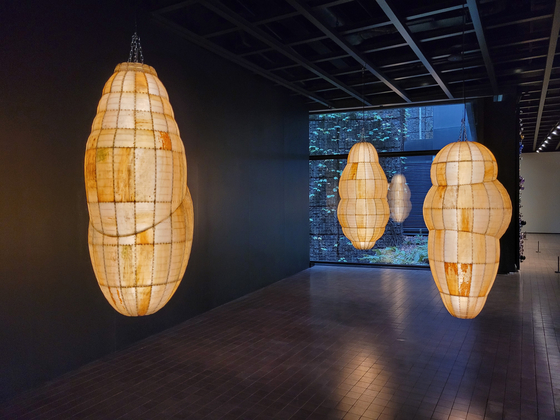 Cocoon-like works by Korean-American artist Anicka Yi are now on view as part of the ”Strange Planet” exhibition at a permanent collection gallery for contemporary art in Leeum Museum of Art. [MOON SO-YOUNG] 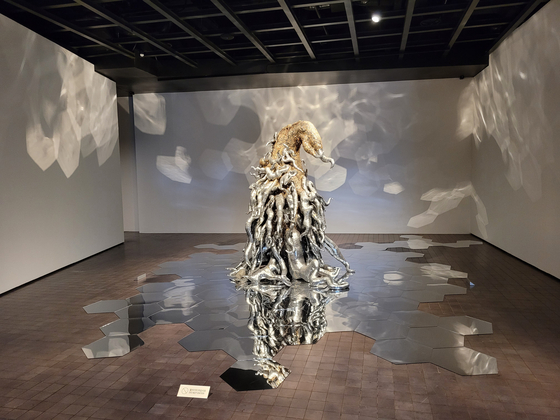 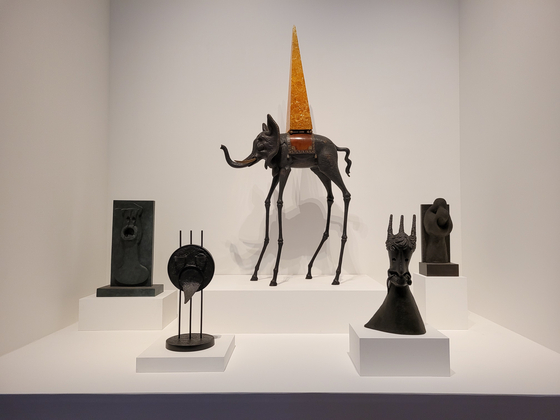 A sculpture by the famous Surrealist artist Salvador Dali, center, and sculptures by pioneer of Dada and Surrealist art Max Ernst are on view at a permanent collection gallery of Leeum. [MOON SO-YOUNG]


Perhaps one of the most interesting exhibitions of the permanent collection is ”Strange Planet,” which focuses on the imaginative power of art. Among the works are Anicka Yi’s luminous cocoon-like sculptures, within which robot insects are flying; U-ram Choe’s kinetic sculpture depicting an imaginary machine-organism creature; and Lee Bul’s life-sized “Monster” consisting entirely of tentacles reminiscent of an octopus, human limbs and plant roots.

“Over half of the works now on view in these exhibits have never been shown in Leeum before, so they will help the audience rediscover the museum's contemporary art collection,” new deputy director Kim Sung-won said.

Kim, former artistic director of the state-run Asia Culture Center in Gwangju, took the position in Leeum last month. She explained that the current and upcoming exhibitions had already been planned by the museum’s curators before she came and that she will actively participate in making new exhibitions from around early 2023.

Leeum has no director for now, since the former director Hong Ra-hee, wife of the late Lee, resigned in 2017 after their son and current Samsung leader Lee Jae-yong was arrested on charges of bribery in the scandal that led to former President Park Geun-hye’s impeachment. The museum thus abstained from special exhibitions and, in February 2020, temporarily closed its doors, citing its renovation and the coronavirus pandemic. Lee was released on parole last August.

Art world insiders say Lee Seo-hyun, 48, former Samsung C&T president and the second daughter of Hong and the late Lee, will likely be the museum’s new director. She took the position of the head of the museum’s advisory board in December, 2018. 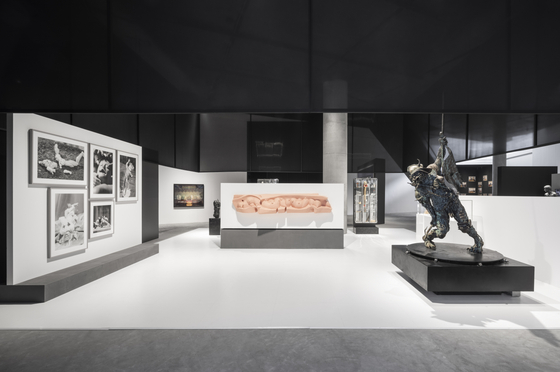 A view of the ″Distortion″ section of ″Human, 7 Questions,″ a special exhibition that celebrates the reopening of Leeum. [LEEUM MUSEUM OF ART]


Leeum’s new special exhibition, “Human, 7 questions,” curated by Kwak June-young, is ambitious both in its theme and scale. The show explores the human condition mainly through the human body under seven themes including “distortion” of the body following physical and mental violence; “equivalence” of bodies beyond gender dichotomy and “avidness” for a body beyond human limits, such as a cyborg body. The exhibition features more than 130 works by 50 artists including big names such as Alberto Giacometti, Louise Bourgeois, Yves Klein, Andy Warhol, Nam June Paik, Cindy Sherman and Antony Gormley.

The exhibitions are free but require booking in advance on the museum's website (www.leeum.org). Up to 600 visitors are allowed per day.

Explore your dreams while still awake at 'Dreamer, 3:45am'